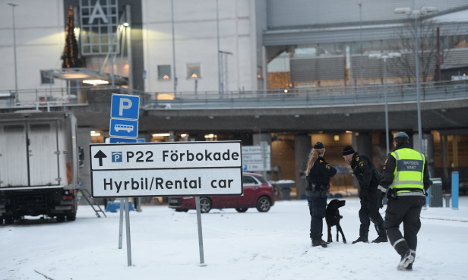 Officers cordoned off an area at a car park at terminals 2 and 3 after security staff discovered the item in a rubbish bin outside the building.

“They found a small parcel in a bin and reacted to that, and made the assessment that a forensic team should look at it,” Stockholm police control room officer Sven-Erik Olsson told the TT newswire.

Police were called to the scene at 4.41am and later took the suspicious item to a forensic lab for analysis. But by 9.30am they had reported that the item was not dangerous.

Earlier in the morning a cordon was set up to prevent passengers from accessing or walking from the car park directly to terminal 2.

Police said the terminal itself had not been evacuated. However, some passengers reported they had been refused entry.

“Nobody's allowed in. We're waiting in the baggage area in terminal 3. Around 250-300 people are here,” Peter Bergman, who was set to fly to Paris, told Swedish tabloid Aftonbladet just before 7am.

Four departures to Amsterdam, Berlin, Paris and London were delayed by an hour, but it was not believed the incident would continue to affect air traffic throughout the day.

“These three planes are probably parked in such a way that they want to hold the flights,” said Åsa Öhman, press officer at Swedavia, which operates the airport.