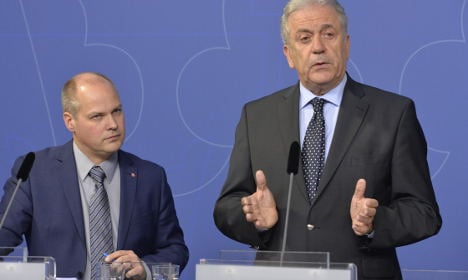 EU's asylum and migration minister Dimitris Avramopoulos (right) with Sweden's Migration Minister Morgan Johansson. Photo: Jonas Ekströmer/TT
The talks were ordered by the EU's asylum and migration minister Dimitris Avramopoulos after Sweden introduced mass identity checks on its border with Denmark for the first time in 50 years on Monday, with Denmark later toughening controls on people arriving in the Nordic country from Germany.
“The goal of this meeting is to improve coordination between the concerned countries in order to ensure better management of the migratory pressure,” European Commission spokesman Margaritis Schinas said on Tuesday.

The discussions will involve Swedish migration minister Morgan Johansson, Danish immigration minister Inger Støjberg and Ole Schroder, a German interior ministry official, said the Commission, the executive arm of the 28-nation European Union.
Jonathan Holst, press secretary for Johansson, confirmed to Swedish broadcaster SVT on Tuesday afternoon that the Swede would be travelling to Brussels the following day. But he suggested that people should not be alarmed by the hastily organised meeting.
“That's right, we will go there tomorrow. It feels quite natural. They want to update themselves on the developments and stay informed about the various measures,” he told the network.
However the AFP news agency reported that Brussels was studying the legality of the actions, which include new Swedish measures requiring travellers between Denmark and Sweden to show their ID cards, driving licences or passports.
READ ALSO: How do commuters and travellers feel about the new checks?
The changes are aimed at keeping out undocumented refugees and come after Sweden, which has taken in more asylum seekers per capita than any other European nation, said it could no longer cope with the unregulated flow of new arrivals at the end of 2015.
Just hours after the initiative got under way on Monday, Denmark announced that it was introducing tougher controls on its frontier with Germany as a direct result of Sweden's decision.
“When other Nordic countries seal their borders it can have major consequences for Denmark,” Danish Prime Minister Lars Løkke Rasmussen told reporters in Copenhagen.
“It can lead to more asylum seekers,” he added.
Stockholm and Copenhagen both informed the European Commission about the new measures they adopted.
“It appears to be a situation covered by the rules,” commission spokeswoman Tove Ernst told AFP when asked about Denmark's move. “We will closely monitor the situation.”
The refugee crisis has been a major point of contention between Sweden and Denmark. Sweden took in over 160,000 asylum seekers in 2015, while Denmark has received just 18,000.