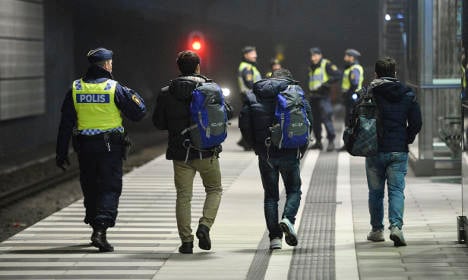 Police escorting asylum seekers away from Hyllie train station in Malmö last year. Photo: Johan Nilsson/TT
Police in the southern Swedish region of Skåne said they had registered just 48 migrants arriving in Sweden on Monday. Excluding New Year's Day, there had been at least 200 per day since December 29th.
“One can say that it's a sharp drop. But it's only been one day (since the controls were introduced), and we can't exclude that refugees will find other ways of entering Sweden,” police spokeswoman Ewa-Gun Westford said.
Sweden – which has taken in more asylum seekers per capita than any other EU nation – recently said it could no longer cope with the unregulated flow of arrivals.
In a bid to stem the influx, it has since Monday required all travellers to show photo identification when entering from Denmark, the main entry point for refugees hoping to start a new life in Sweden.
The Swedish coast guard said it was prepared for the possibility that migrants may now try to clandestinely cross the Öresund strait that divides Denmark and Sweden.
“We have to be prepared for the fact that people may seek other routes than the (Öresund) bridge or ferries, regardless of whether it is a Danish network behind this or individual initiatives,” coast guard spokesman Mattias Lindholm told news agency TT.
Sweden has yet to officially register any migrants arriving on clandestine boats across the Baltic.
An inflatable dinghy discovered in early December on the shores of the southern town of Skillinge raised suspicions of such a crossing, but border police said it was “very unlikely” the boat had been used to such ends.
Sweden, a country of 9.8 million inhabitants, received 163,000 asylum applications last year.
More than one million migrants reached Europe in 2015, most of whom were refugees fleeing war and violence in Syria, Afghanistan and Iraq, according to the United Nations refugee agency.