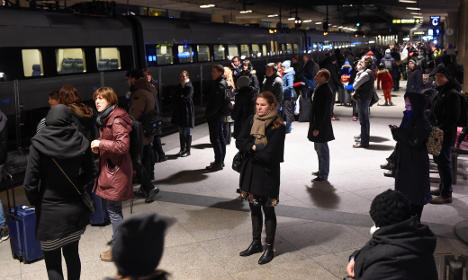 Around 10,000 travellers had passed the checkpoints at Copenhagen airport's Kastrup train station by the end of rush hour on Monday after Sweden's new ID rules came into force at midnight.

But some, including international tourists and Swedish citizens, were denied entry after Danish rail operator DSB – which has been tasked with carrying out the checks – refused to accept their IDs.

“One security guard did not let travellers through and then another one did. Some French students in Sweden and people with Swedish residence permits were not allowed in,” Centre Party councillor Niels Paarup-Petersen, who is campaigning against the checks, told the TT newswire.

INTERVIEWS: What do travellers think of new border checks?

Swedish journalist David Nyman told The Local that he had been forced to take a taxi after his press card – which is normally accepted as identification in Sweden – had been refused.

“I got denied because the guards argued that my press ID was not good enough as an ID card,” he said.

And an Italian tourist told Göteborgs-posten she had decided to spend her holiday in Copenhagen instead after her Italian national identity card failed to win authorities' approval.

DSB said “fewer than 100” passengers had been turned away, but eventually revoked the decision not to accept European identity cards on Monday, after the interim head of Sweden's national border police commented the Danes were “overinterpreting” the rules.

Tens of thousands of journeys are recorded on the bridge each day and there are estimated to be 8,600 people who commute daily between Copenhagen and the southern Swedish city of Malmö.

Under the new rules, all rail passengers now have to exit the train at Copenhagen's Kastrup airport rail stations and clear checkpoints before boarding again.

Most commuters said on Monday that the controls had gone smoothly, with only expected delays of around 30 minutes or less reported. However, many Swedes do not return to work after the Christmas holidays until later this week or next.

Surprised at just how easy this all was. Staff are friendly and it was efficient. It's a terrible concept executed very well. #öresund

It is the first time in half a century that Sweden is demanding photo identification for all travellers from Denmark and deals a blow to Europe's cherished passport-free Schengen system.

The measures are aimed at keeping out undocumented refugees after Sweden, which took in close to 163,000 asylum seekers in 2015, said it could no longer cope with the influx.