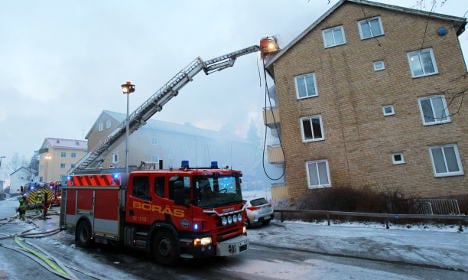 Firefighters at the blaze in Borås. Photo: Frida Winter/TT

Crews were called to the inferno in a three-storey building, home to several families, in Borås, central Sweden, at 4.15am. Three hours later the battle was still ongoing.

“Our focus is to limit (the fire) so it doesn't spread in the building,” Lennart Larsson of the fire and rescue services told the newswire at 6.30am. However, two hours later the blaze was under control.

No one was injured in the fire and the building was quickly evacuated. However, temperatures dipped to below -10C in Borås on Thursday morning, which has sparked unexpected difficulties for crews.

“The water in our tank has frozen. So we've had to replace it and bring in a new fire engine,” said Larsson.

Sweden has experienced a cold snap in the past couple of days, with the mercury dropping to a new seasonal record of -42.8C in Naimakka in the far north overnight.

A tweet by a local newspaper showing the scene

Meanwhile, two people were in police custody on Thursday after a separate blaze broke out in a multi-storey building in the Stockholm suburb of Vällingby in the early hours of the morning.

“We received several alerts about a powerful explosion just before 2am. The explosion probably came from a tobacco store on the ground floor of the building and the fire then spread,” police control room officer Nicklas Mattsson told TT. A fire engine at the Vällingby blaze in Sweden on Thursday. Photo: Lars Schröder/TT

The building was evacuated, with 23 residents being offered temporary shelter at a nearby school. Ten of them were injured and five were taken to hospital.

“It is unclear what injuries they have. One of them is understood to have broken a leg after jumping,” said Mattsson.

Fire crews managed to put out the flames shortly before 6am. The area remained cordoned off later in the morning while police carried out a forensic investigation.