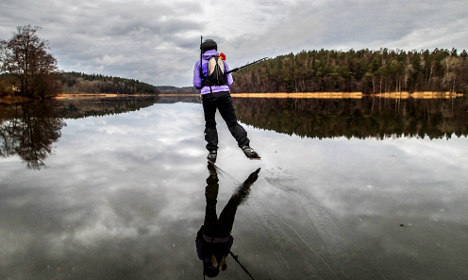 Ever wanted to skate around Stockholm's archipelago? Photo: Tobias Röstlund/TT

Is there a better way of discovering Stockholm's many lakes or its archipelago than on a pair of skates? No, according to the team behind ICEguide, which offers ice skating tours on natural ice with a guide. On everything from introductory tours of five to six hours to three-day skating adventures they take you around the best frozen waters of the capital.

Where: The Stockholm area

Cost: From around 1,300 kronor depending on the tour

This spectacular fairytale show is skating into Gothenburg in western Sweden this weekend (followed by Malmö next week). Now in its 25th year, it promises a cold but heartwarming ice-skating adventure celebrating some of Disney's most beloved characters, including Anna and Elsa from Frost, Simba from the Lion King, Peter Pan, Tinkerbell and many more.

Here's a chance to hide from all that snow and ice outside and have a merry time indoors. Did you know Swedes don't just celebrate Christmas, but also the end of Christmas? The 'julgransplundring' – literally the plundering of the Christmas tree – traditionally takes place on January 13th and involves dancing around the holiday fir one last time before you move on with your life. Celebrate this tradition in style at the Nordic Museum this Saturday instead, where there will be singing, dancing and a belated visit from Santa. The entire Swedish national ski cross team is set to perform in Duved, Åre, one of Sweden's biggest ski resorts this weekend.  According to the Swedish Skiing Association, the professional athletes were supposed to have competed in Italy but had to cancel due to lack of snow. Ski cross is a downhill racing event with high jumps and sharp turns. If you can't stomach that much excitement, just go for the hot chocolate and after-ski parties.

When: Various events, including a youth ski camp, taking place between January 7th and 10th

Tickets: You only have to pay up if you're taking part in the competition

What would a Stockholm winter be without ice skating in Kungsträdgården, one of the capital's prettiest parks? It had to close earlier in the season when the mercury soared to new December records, but don't worry, temperatures are back to freezing in the Nordic nation.

Tickets: If you have your own skates, it's free. Check the website if your renting skates.