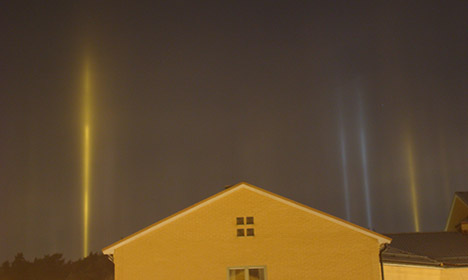 When Raitis Freimanis, 54, got up early on Wednesday morning in Bromma, Stockholm, he discovered something unusual outside his window. Several tall columns were shining up from the ground, radiating yellow and blue light.

“I was thinking what the hell is this? At first I thought it was a floodlight or something, I thought to myself, why would they put up a floodlight at 5am?” Freimanis told The Local on Thursday.

The Stockholmer said he had been woken by the family's cat and had decided to go and feed the animal. And after seeing the magnificent strange pillars, he ended up getting his son and wife out of bed to see them too, in case they didn't appear again.

Together the family researched what they had seen. They believe that the lights were an optical phenomenon caused by the reflection of bright lights from Stockholm city centre, by tiny ice crystals, hovering in the air.

“It was -13C here in Stockholm and windless, and there were ice crystals in the air,” Freimanis explained, adding that it was hard to judge the height of the pillars. The fact that the lights were yellow and blue – the colours of the Swedish flag – appears to have been a coincidence.

The family —  including the cat — were hooked by the light pillars from 5am until around 6.30am, taking photos of the phenomena – images which have since gone viral on social media in Sweden. Freimanis, who is an amateur photographer, also has experience of catching the region's famous Aurora Borealis (Northern Lights) on camera).

“This was just as cool as seeing the northern lights,” he told The Local.

By breakfast time the lights started to disappear, but Freimanis told The Local that the family had kept watching in case they returned and had seen them several more times since Wednesday morning, although they were not as bright and clear as the first time around.

With cold weather continuing across Sweden, the photographer said he was crossing his fingers that they would return again on Thursday.

“It is possible they will show up again tonight,” he said, hopefully.

Light pillars form when there are very cold conditions and humid air. The vertical shafts of light extend from a bright light source.

“It is not very common. The moisture forms a special kind of ice crystals that are suspended in the air. They have flat surfaces that allow the light to gather in this way,” Terje Alsvik Walløe from the Norwegian Meteorological Institute (MET Norway) said on Thursday.