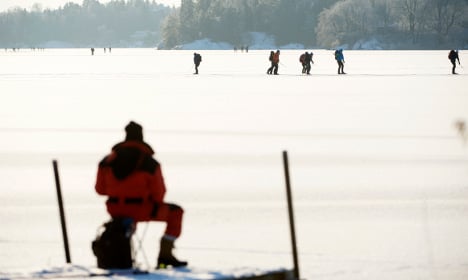 People skating on a lake near Stockholm. Photo: Henrik Montgomery/TT

The coldest temperature of the season – and the coldest in January since 1999 – was recorded in Naimakka in northern Lapland overnight as bitter winds swept in from Russia.

“It's been really cold in the past few days and it will continue,” Marcus Sjöstedt, meteorologist at Swedish national weather institute SMHI, told the Aftonbladet tabloid.

After a record-breaking warm month in December, this week's frosty weather has been getting people in Sweden excited, with many taking to social media to post pictures of the Nordic winter wonderland.

But on Thursday the weather also caused problems, with one bus transport company in the central Värmland region forced to cancel around 50 services after the biofuel-run vehicles failed to cope with the cold.

“It's a filter in the engine that for some reason gets blocked when the fuel gets thicker,” Lars Bull, chief executive at Värmlandstrafik, told the TT newswire.

Meanwhile all trains north of Boden have been cancelled for the rest of the day. SJ said its policy was not to operate rail traffic when temperatures drop below -35C.

“It's because safety comes first. If the train comes to a standstill and loses power it's dangerous for passengers when it's that cold,” said press officer Malin Hultgren.

Firefighters also reported they had struggled to put out a fire at a three-storey housing block in Borås, western Sweden, in the early hours of the morning after the water froze in the tanks. The latest snow and ice snap still remains a long way from the coldest date recorded in Sweden. Back in 1966 a temperature of -52.6C was measured in Vuoggatjålme in Sweden's far north.

Meteorologists and doctors have nevertheless warned Swedish residents to be cautious in the coming days as they attempt to enjoy the below-freezing weather across much of the country.

WHAT'S ON: Five frosty ways to enjoy the n-ice weather

The low temperatures are set to stick around next week, although they are expected to creep slowly upwards. Check out The Local's weather page to see the forecast for your parts of Sweden.