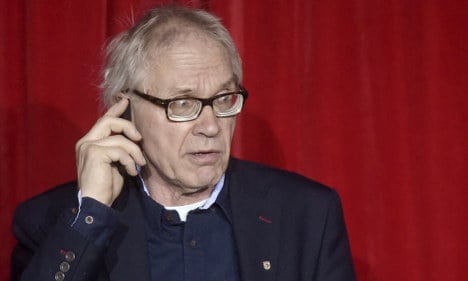 Lars Vilks pictured in Helsinki last year. Photo: Vesa Moilanen/AP/TT
Lars Vilks, who was caught up in last year's terror shootings in Copenhagen, arrived at the venue amid a strong police presence, with local officers from the Örebro region supported by a team from the neighbouring Värmland area.
“We have secured the premises both inside and outside,” Tommy Lindh, a spokesperson for Örebro police told the TT news agency.
Meanwhile the principal of Örebro Art School (Örebro Konstskola) school, Peter Ekström told Swedish newspaper Expressen that he had wanted to give the controversial cartoonist the chance to speak openly, despite the security risks.
“It is the first day of the semester, and our students get this as a great lecture. Lars Vilks has become a symbol of a threatened freedom of expression and a threatened artistic freedom,” he said.

A photo of Vilks arriving at the art school, tweeted by a local newspaper

Vilks gained international notoriety for a cartoon portraying the Prophet Muhammad as a dog back in 2007, prompting protests by Muslims in Örebro, west of Stockholm, where the Nerikes Allehanda daily newspaper which published the cartoon is based. Egypt, Iran and Pakistan made formal complaints about his work.
Four men were accused of plotting to kill him at a Gothenburg art fair in September 2011, though they were later acquitted.
GUIDE: Who exactly is Swedish artist Lars Vilks?
The 69-year-old is believed to have been the intended target of an attack at a debate on Islam and freedom of expression in January 2015, when a gunman fired a volley of shots into the Krudttønden cultural centre in Copenhagen, leaving a 55-year-old man dead and three police officers wounded.
The artist went into hiding, while a number of universities and institutions cancelled scheduled talks and appearances by the cartoonist amid security worries.
His lecture in Örebro on Thursday was set to take place as France marked the one year anniversary of the terror attack on satirical magazine Charlie Hebdo, a publication that received an award in 2015 from Vilk's Danish support committee for its work defending freedom of expression.
Vilks was understood to be planning to focus on themes in contemporary art in his latest Swedish lecture, with students given the chance to question the cartoonist afterwards.
“Of course there were some who thought it was awkward that there would be a lot of cops here, but I got a lot of very nice support from students when I presented this idea,” said Ekström.
In Paris, police on Thursday shot dead a knife-wielding man wearing a fake suicide bomb vest who attempted to get into a police station a year to the day since the shootings at Charlie Hebdo.