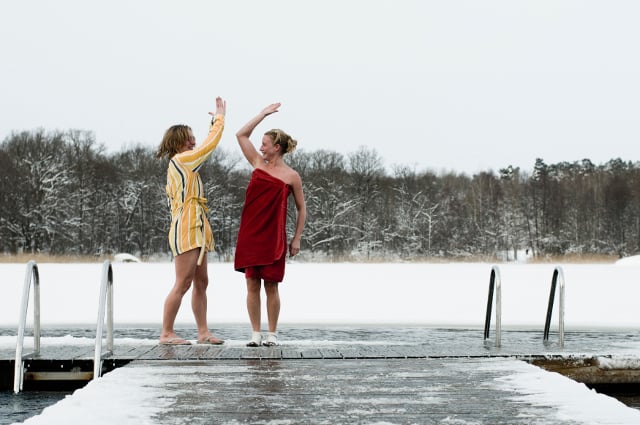 The Local give you eleven tips for how to act like a true swede during winter. Photo: Helena Wahlman/TT

1. Say the sentence “there is no such thing as bad weather, only bad clothing” every time someone says it is cold outside

This phrase “det finns inget dåligt väder, bara dåliga kläder” is something Swedes grow up hearing, and it's most commonly used during the coldest winter months. While many would agree it's possibly the most annoying sentence of all time, plenty of others take every chance they get to say it out loud. According to the Swedes, there is no bad weather, only bad clothing. Photo: Lars Pehrsson/SvD/TT

2. Complain about Stockholm complaining about the snow

Ask someone from outside the Swedish capital (especially the north) and they'll tell you Stockholm never experiences real winter. This is important to remember when the Swedish media (largely based in the capital) starts complaining about weather the moment the first snowflake arrives in the city. Thick snow rarely settles in the centre of Stockholm, but when it does, it becomes a huge talking point, with plenty of locals bemoaning its impact. To act like the more than eight million Swedes who don't live in the capital, have a joke about Stockholmers struggling in the white stuff. 3. Have a discussion about where the north of Sweden starts

Once you've had a good complain about Stockholmers, now it's time to take on the classic debate of where the northern part of Sweden starts. This popular discussion point gets even more intense during winter, when those living north of the capital start to experience really harsh dark and cold weather. But just how far north do you need to live to have the legitimate right to complain? The discussion of where the northern part of Sweden start is even more intense during winter. Photo: Janerik Henriksson/TT.

4. Drink even more coffee than usual

Swedes are some of the biggest coffee consumers on the planet and when winter arrives their coffee consumption increases rapidly. At this time of year you can act like an authentic Swede by enjoying a morning coffee, a coffee between meetings or lectures, a lunch coffee, the afternoon coffee (don’t you dare forget this one) and of course a meeting-up-a-friend-after-work coffee. Oh and don't forget to have one to warm you up before bedtime as well. In Sweden, you can never drink too much coffee. 5. Plan everything with the weather and daylight in mind

The Swedish winter is known for two things: being cold and dark. Swedes keep the exact amount of daylight in mind when planning their daily activities, as well as checking the weather forecast. How cold will it get? Will there be snow? Will it get dark before we finish our walk? Should we take a torch or some reflective head clothing with us? (Remember there is no such thing as bad weather, only bad clothes). 6. Jump into a water ice hole – no really

A Swedish tradition is to jump in a ice hole during winter. This is just as crazy as it sounds, but plenty of Swedes will try and convince you to do it. They'll tell you it will turn you into a true Viking, clear your head or even suggest that the cold water will help you burn more calories. Most ice holes are, however, located close to lakeside saunas, so the idea is you're roasting hot before you go in and cool down very rapidly. Go for a swim in ice water to act like a real Swede. Photo: Helena Wahlman/imagebank.sweden.se

Swedes embrace many other outdoor activities during winter, to make sure they catch as much sunlight as possible. But the two must-try sports are without doubt ice-skating and skiing, many of which you can test out even in city centres. However, as soon as the dark kicks in it is okay to go home to warm up with a hot cup of hot chocolate, coffee or glögg. While glögg is usually associated with Swedish Christmas, it is socially acceptable to drink it as long as snow lays on the ground. 8. If the temperature gets over 5C degrees, take off your jacket

People in the Nordics are used to cold weather and want to soak up every possible moment when it gets milder. After weeks of snow, accompanied by thick jackets and clumsy shoes, if the temperature gets above 5C you'll really start to feel the difference. Look out for true Swedes taking off their jackets without anyone questioning them. When the temperature gets over +5 it is socially acceptable to take off your jacket. Photo: Björn Larsson/TT.

9. Complain about 'datumparkering' – a rule that limits parking spaces during winter

One of Sweden’s ways of being fully prepared for snow chaos is to make sure that snowploughs have enough space on the roads. The solution is to have so called ‘datumparkering’ (date-parking) which means on even dates, you can only park on the side of the road with even house numbers; on odd dates it's the reverse. When 'datumparkering' kicks in, Swedes with cars start complaining more than ever, especially if there is no actual snow for the snowploughs to remove. That's one who forgot about the datumparkering. Photo: Anders Wiklund/TT

If you think it's a myth that there's little sun in some parts of northern Sweden during winter – it isn't. In some parts of the far north there's only a few hours of daylight each day in December and January. Swedes know that the fewer hours of daylight during winter can lead to seasonal affective disorder (autumn/winter depression) and that a lack of rays can also cause a shortage of vitamin D. So, the moment there are a few rays peeping through the clouds, you'll spot Swedes stopping in their tracks to soak them up. Remember to catch as much sunlight as possible during the day. Photo: Hasse Holmberg/TT

Congratulations you've just got Swedish citizenship! This is about the most Swedish thing you can do during winter, making the most of the holidays while telling your friends from other countries that the whole thing's down to 'health reasons' thanks to your extensive new knowledge of the benefits of sunlight. Swedes tend to fly away from the cold to warm up in Thailand. Photo: Johan Nilsson/TT.