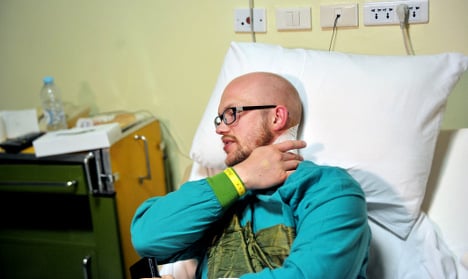 Olovsson, 27, was stabbed in the neck. Photo: AP Photo/Mohsen Nabil

Sammie Olovsson, 27, was among three foreigners injured in the Friday attack by men carrying knives on the Bella Vista hotel in Hurghada — the latest blow to Egypt's struggling tourism industry.

An elderly Austrian couple wounded in the attack were still being monitored, he added.

“They are stable and there is no cause for worry but they need more care,” Alaa said.

Hospital director Reda al-Naggar said the couple could be discharged as early as Sunday.

Two men carrying knifes stormed the restaurant of the Bella Vista as tourists were having dinner on Friday night. Security forces shot the attackers, killing one and wounding another.

The incident further undermined efforts to repair the country's damaged tourism industry, coming a day after a Cairo hotel hosting Israeli tourists came under attack by men who hurled fireworks and fired birdshot.

The Islamic State group claimed that attack, which it said targeted “Jewish” tourists.

Police said they were Arab Israelis, and that the assailants had targeted policemen guarding the hotel and not them.

The jihadist group's Egyptian affiliate is waging an insurgency in the Sinai Peninsula, and dealt a body blow to the country's tourism industry by claiming to have downed a Russian airliner in October, killing all those on board.