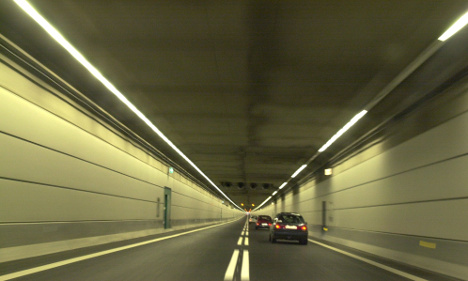 The people were allegedly on their way to the tunnel which connects the Danish side to the bridge. Photo: Anders Wiklund/SCANPIX

Five people, an adult and a minor, were stopped by police after they were found walking on the motorway towards the Öresund tunnel and bridge connecting Copenhagen to Malmö in Sweden on Sunday evening – the second similar incident in less than a week.

“Because it was on the Danish side we called our Danish colleagues. They took a few people into custody,” police spokesperson Ewa-Gun Westford told Swedish public broadcaster SVT.

Danish police confirmed to TV2 that all five, an adult and four minors, had previously sought asylum in Denmark.

“We went out and got them, and they were taken back to the refugee camp where they are staying,” said police control room officer Carsten Reenberg.

The controversy came just hours after police arrested a man allegedly trying to smuggle a migrant into the country aboard a rubber dinghy from the Danish town of Helsingör to Helsingborg.

Refugee support groups have expressed fears of human trafficking and dangerous clandestine crossings across the Baltic as a result of Sweden's ID checks.

And Westford said she would not be surprised if more people attempted to avoid the controls either by boat or by attempting to cross the Öresund bridge on foot.

“This could be the first sign of something new. We know that asylum seekers are trying to walk through the tunnel crossing the English channel,” said Westford.

“We know from other occasions when there are new rules that it's first quiet for a couple of days and then people try to find new ways around the obstacles,” she said. Meanwhile, Sweden's infrastructure minister Anna Johansson visited the region on Monday to meet with Danish counterparts, who have voiced concern over the checks in the integrated Öresund region. More than 8,000 commuters from Sweden and Denmark travel daily by train across the bridge.

“Of course we're listening to Danish views and will see if it is possible to solve the issues that are causing the most problems. But we have a strong interest in bringing down the number of people seeking asylum in Sweden,” the minister told reporters after a meeting in Copenhagen.

READ ALSO: What do commuters think of ID checks?

A country of 9.8 million people, Sweden took in 163,000 asylum seekers last year, more per capita than any other EU nation.

Unable to cope with the unregulated flow of arrivals, it has since January 4 required all travellers to show photo identification when entering from Denmark, the main entry point for migrants into Sweden.

The number of asylum seekers has dropped sharply since then. On January 8, the migration agency said the number of asylum applications received in the first week of January had fallen below 1,500, after receiving almost 10,000 a week for much of October and November.