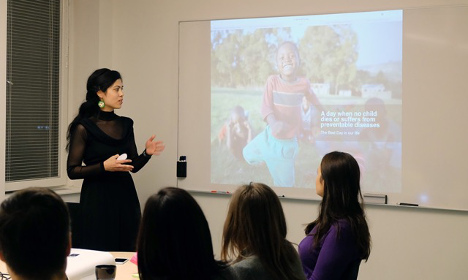 Rahimi, 30, was only seven years old when civil war broke out in her birth country of Tajikistan. She and her family were forced to flee from the capital to the rural north. And in the midst of the chaos and uncertainty, her younger brother was born and her father developed fatal brain cancer.

“I understood for the first time that health, for kids or parents, is the thing that makes you happy,” she tells The Local – 23 years, two children and several university degrees and career successes later.

The daughter of an emergency doctor and a gynaecologist, it is not difficult to understand Rahimi's motivation behind starting up Stockholm-based Shifo – a non-profit NGO with a global mission to boost child health – together with her brother and sister-in-law.

“Even when my own children are sick, it could be a simple flu but I still can't focus 100 percent on anything else. Health is happiness. How could you not want others to feel happiness?”

Perhaps more than any other vocation, medicine tends to run in the family, so in many ways her and her brother Rustam Nabiev's paths were staked out from the beginning.

“In Tajikistan we don't have 'fritids' (Swedish after-school daycare), so we spent all our time in the hospital as children. And they talked about it a lot – my father would be thankful after successful emergency operations and my mother would talk about when she had delivered a healthy baby,” she smiles. Rahimi first arrived in Sweden in 2008, partly after being recruited by the prestigious Karolinska University Hospital, partly following in the footsteps of her brother – who already lived here – and partly driven by a need for a change of scenery after her father passed away.

“I gave birth to one of my children in Tajikistan and the other in Sweden, and it was such different experiences. In Tajikistan I had to read up a lot myself to get the evidence for my questions and ask my mother. In Stockholm, the first thing my 'barnmorska' ('midwife') did was give me a book to read and it had everything: from breastfeeding to what temperature you should bathe your child in,” she says.

The Local meets her in Shifo's bright offices in Stockholm as she's busy packing supplies for her husband – who has also joined the organization and is set to fly to Uganda to oversee their programs. He will return in February, when Rahimi will travel to the African country herself to continue the work.

“Our vision is simple: it is a day when no child dies or suffers from preventable diseases. This could be children missing vaccines, not receiving adequate nutrition, the transmission of HIV,” she says.

Currently operating in Uganda and Afghanistan but hoping to expand in other countries, Shifo was set up in 2013 on the back of research Rahimi had been doing on behalf of the Karolinska to identify some of the root causes of high child mortality from preventable causes and coming up with a way of combining tech and reliable data to provide health solutions.

While Swedes get their 'personnummer' ('personal number') when they are born and mums get automatically called to their midwife for regular check-ups, half of the world's children are never registered at birth and as a result often fall off the map of the health system, explains Rahimi.

“We have developed a system called 'MyChild' which is used by nurses. It makes all the information about the child's vaccinations and medical history available to the nurse,” she says. Rahimi on her last visit to Uganda. Photo: Shuhrat Yusuf

The system reduces the amount of time medical staff spend on administration tasks – which allows them to spend more time with parents – and also provides data reports to the local government.

“Decision-makers in many countries, like Uganda, often lack reliable and accurate information. They can allocate resources properly when they know where the problems exactly are. We identify the gaps, whether it's that there's no nurse in specific health centre or that the outreaches to the rural areas are not being done and all that is done automatically by using the MyChild system.”

Shifo relies on funding and support from investors within the private and corporate sectors, as well as funding institutions such as Swedish Postkodlotteriet and the Ikea Foundation, and private individuals, who can track the progress of their donation online and see exactly what it is used for.

“The transparency is something we've taken from Sweden. Corruption is widespread in Tajikistan and you see it everywhere, at school, at some workplace, in healthcare. It jeopardizes your life and you hate it. You just hate it.”

“You don't know as an ordinary person how to tackle it, but when I first came to Sweden with all that baggage I saw so many things that could be improved back in Tajikistan. There, you're taught to rely on yourself and your family if you got an illness. Here in Sweden, you trust the health system.” Rahimi with her husband and two children. Photo: Private

In her spare time, Rahimi spends most of her time with her family, taking her son and daughter to Skansen (Stockholm's outdoor museum), taking them mushroom picking, berry picking, reading and making sure that they value the things that are available to them in Sweden but not to children in poorer parts of the world.

She says the most difficult thing for her and her husband is to be away from each other and their children when they travel the world to fulfil their vision of making sure that health, too, does not have to be a luxury object exclusive to Scandinavia and developed nations.

“But also our team is just too good, if there's such a thing. Shifo's vision is no joke, but it's great to come to work every day. When you've got a diverse team with so many different people all supporting each other through the tough times – you're not afraid of anything.”