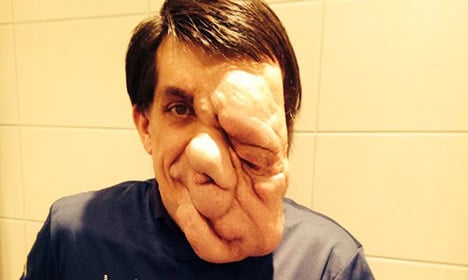 Kim Nilsson does not let his condition stop him from living his life. Photo: private

Kim Nilsson has tumours on his face and neck, but that does not stop him from living his life to its fullest. Now the 41-year-old Swede wants to inspire people across the globe to believe in themselves.

Nilsson was born with Neurofibramotos Recklinghausen, which causes the benign tumours. The condition makes the tissue grow faster than it normally does.

But he has never let his appearance stop him from believing in himself or living his life the way he wants to live it, and he explains that he wants to inspire others to believe in themselves too.

“It’s a lie to believe that you are not worthy or good enough. There are so many that are unhappy with themselves and are angry at life,” he says.

Already something of a celebrity in Sweden, Nilsson is used to getting a lot of attention in domestic media. In the coming year, his story is set to go global in a documentary by the Discovery Channel.

“It will start being shown in Asia, and then USA, Mexico and then Europe,” Nilsson tells The Local.

The documentary will reveal insights Nilsson’s daily life and his goal is to show that he is living a typically Swedish life. He has a house and three children with his former wife.

For Nilsson, it has been important to accept who he is and make the most of every moment. He grew up learning to appreciate what he had and not focusing on what he does not have or wished he had.

“Sure, sometimes it hurts and it feels tough, but I have never given up,” he says.

The Swede is determined to keep up his positive spirit, despite a tough 2015. His son got diabetes and Nilsson got divorced, saying the couple were too busy and stressed to keep their love alive.

“You have to understand there will be brighter times, and because of that it is important to never stop smiling, even if everything feels bad and you are having a tough time,” he says.

He thinks the attention he regularly gets in the Swedish media is fun, but a little bit scary, adding that he thinks it can be a little bit too much sometimes.

“But right now it feels good,” he says.