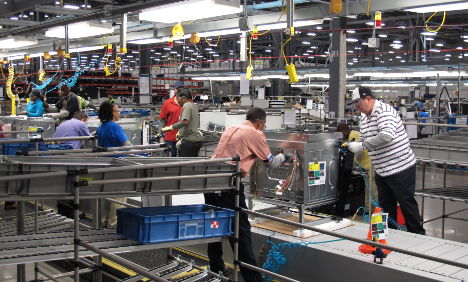 Electrolux workers at a factory in Memphis in the US. Photo: Adrian Sainz/AP/TT

Keith McLoughlin said on Monday that he was going to retire from leading one of Sweden's largest businesses, while the company's board has appointed Jonas Samuelson to replace him next month.

“It is now time for me to pass the baton and return to my family in the US,” McLoughlin announced in a press statement.

“With the dedication of the entire Electrolux team, we have strengthened this great company by substantially increasing our investments in consumer-led innovation, focusing on profitable growth areas and leveraging the scale of the company through global integration,” he added, describing his replacement as a “well prepared internal successor”.

Samuelson is currently head of the business area Electrolux Major Appliances Europe, Middle East and Africa and joined the firm in 2008.

McLoughlin, 59, who has been CEO of the Swedish industry leader since 2011, has been living apart from his family since in 2012. He denied rumours circulating last summer that he was planning to move home.

The shift in management comes following a troublesome few months for the global company which is world's second-largest home appliance maker and sells brands including Frigidaire, AEG and Zanussi as well as its own name. In December it announced that a $3.3 billion deal with US electrics giant GE had run into trouble.

The company said soon afterwards that job cuts would be made at the Swedish firm's headquarters in Stockholm in order to absorb the costs of the failed deal.