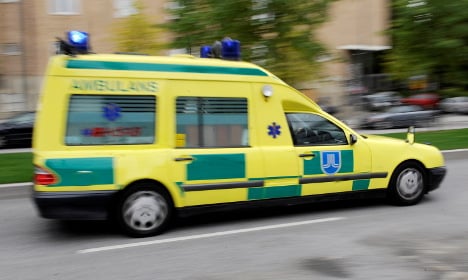 A stock picture of an ambulance. Photo: Bertil Ericson/SCANPIX

The older teen was taken to hospital with serious knife wounds after the incident at around lunchtime at a school in the small town of Broby, Östra Göinge. He later died from his injuries.

He was allegedly stabbed by a 14-year-old school mate, who was taken into custody while police questioned staff and pupils.

“He was cut with a knife, it was serious,” Bertil Håkansson, head of security for Östra Göinge municipality, told the TT newswire earlier in the day.

According to local newspaper Kristianstadsbladet the incident took place in a corridor at Göingeskolan, a school for pupils aged around 13-15, where the younger teen allegedly attacked the 15-year-old with a knife after an argument between the two boys escalated.

“My daughter (…) asked him: 'What have you done?' He said that she should watch herself. She screamed for help. The boy just stood there with a knife in his hand. He stood there like he was paralyzed,” the mother of a girl who witnessed the incident told the Kvällsposten tabloid.

The school immediately cancelled all classes on Tuesday, but said a memorial service would be held and staff would be on site to address any concerns or queries by pupils.

In October three people were killed when an attacker entered a school in Trollhättan in western Sweden with a sword and knife, but overall fatal incidents at Swedish schools are rare.