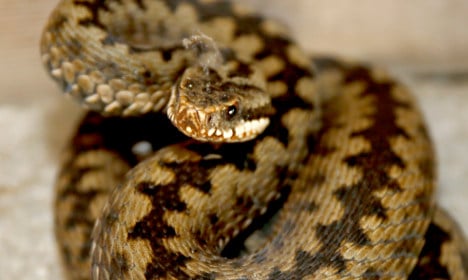 A stock picture of a snake not related to the story. Photo: Terje Pedersen/NTB scanpix/TT
The 16-year-old is accused of murdering the 54-year-old Swede in the flat he shared with his partner.
Police managed to recover a video from the boy's mobile, which shows him shouting and swearing at the man and insulting his sexuality. The victim was found with a shirt tied around his neck and wrists and a dead snake draped around his neck.
The gruesome killing took place in June, with a trial getting under way at the end of last year.
A court in Gothenburg announced on Monday that the young suspect's trial would be paused while experts carried out a full psychiatric examination on the boy. He is understood to have been sleeping rough in the west Swedish city at the time of the alleged attack and to be of north African origin.
Meanwhile another teenager, whose exact age the court failed to establish, was sentenced to three months in a youth detention for charges linked to the alleged murder including trespassing and violent behaviour against a police officer. He was told he would be deported on completion of his punishment.