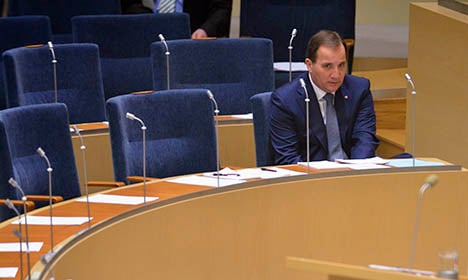 The picture, snapped just over a year ago, shows Stefan Löfven seated on his own in parliament. In the other corner, the centre-right opposition leaders are huddled together, apparently laughing and talking.

The uncropped version of the original image. Photo: Henrik Montgomery/TT

Already iconic in Sweden, the infamous photo of the prime minister got a rebirth on Tuesday after it became the subject of a Photoshop battle between internet community Reddit users.

A Photoshop battle is when a user submit a photo in a thread on Reddit, challenging other users to manipulate it – the more hilarious and inventive the better.

By Tuesday afternoon, the thread named 'Sweden's prime minister is sad and left out while other party leaders having fun during congress' had received almost 4,700 upvotes in the forum.

Sweden's government crisis of 2014 — during which the original photo was taken — saw Social Democrat leader Löfven calling (and later cancelling) a snap election after failing to get his budget passed by parliament when the far-right Sweden Democrats threw their support behind the opposition's proposal.