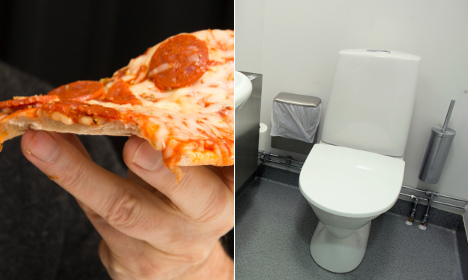 Police officers got a surprise when they arrived at the scene of a break-in at the fast food place in the university town of Uppsala, north of Stockholm, early on Tuesday morning.

For the people in distress were not the burglary victim – but two of the culprits themselves.

The pair, aged 18 and 19, had been caught in the act after an alarm going off at the restaurant had alerted the owner to the ongoing break-in at around three o' clock in the night.

Two of their accomplices fled the scene, but the other two ran back into the restaurant, attempting to barricade the door to escape the owner who tried to reclaim his things.

One of them threatened the angry pizza maker with a knife, but to no avail. Instead, he was forced to lock himself in the toilet – where he in desperation called the police.

“One flees to the toilet and calls the police to get help. Police rescue two men from the owner's wrath,” read a statement published on the police's website.

The two men were arrested and the other pair were still at large later on Tuesday morning.