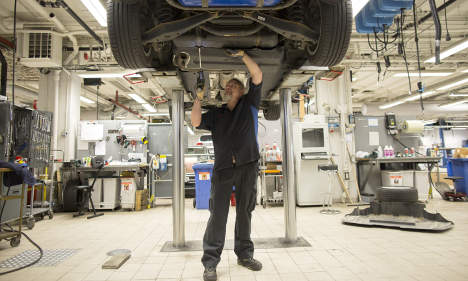 A Swedish mechanic at a VW factory in Gothenburg. Photo: Björn Larsson Rosvall/TT
The chief prosecutor Alf Johansson said the investigation would examine imported diesel models in Sweden between 2009 and 2015, which were equipped with software that minimised emissions during pollution tests, but allowed the vehicles to spew out far more pollutants while on the road.
German automaker Volkswagen has acknowledged rigging the nitrogen oxide emissions of thousands of its vehicles in Sweden as well as millions of others around the world.
Sweden's National Anti-corruption Unit said on Tuesday that the car company had promised to cooperate fully with the criminal investigation.
Johansson added that he would also work to share information with authorities in countries also affected by the scandal.
Volkswagen admitted in September 2015 that it had sold 225,000 vehicles in Sweden fitted with devices that switch on pollution controls when they detect the car is undergoing testing and then switch off the controls when the car is on the road, allowing it to spew out harmful levels of emissions.
Sweden's Finance Minister Magdalena Andersson said at the time that her country may send a tax bill to the German company for undeclared pollution of its diesel vehicles.

Cars sold in the Nordic nation have a tax assessed depending on the amount of pollution they emit.

“If it is proved that the emissions were higher than they said then it is possible that certain cars were taxed too little,” Finance Minister Magdalena Andersson said on Sveriges Radio.

Swedish scientist and environmental campaigner Per Kågeson also made headlines as the scandal emerged, revealing that he had warned the EU about car makers rigging emissions tests almost two decades ago.

The new Swedish inquiry adds to the legal troubles that have mounted worldwide for the manufacturer since the emissions scandal was first revealed on September 18th.

However Sweden was one of the few countries where Volkswagen beat its previous sales records in 2015, while worldwide, sales volumes fell for the first time since 2002.