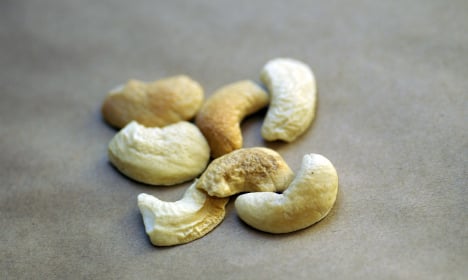 There were way more cashew nuts than this in that car. Photo: Dan Hansson/SvD/SCANPIX

Officers cracking down on the case launched a probe into suspected theft after they found the huge nut stash in the vehicle, which was stopped in a police control outside Gothenburg late on Tuesday.

“We suspect that the cashew nuts have been stolen,” spokesperson Thomas Fuxborg told the GT tabloid, however the two men have denied any involvement in nut theft sprees.

“They can't explain how they got hold of them,” said Fuxborg.

Police were not able to immediately confirm the value of the nuts, but GT reported that a bag of 500g from one of Sweden's largest supermarket chains, Ica, costs around 80 kronor.

But as nuts as this story may seem, it is only one of many strange edible thefts in Sweden. A year ago officers were left bursting with questions after chewing gum worth more than 15,000 kronor was stolen from several supermarkets in southern Sweden.

And last spring a business owner in the Kristianstad area warned a gang of sweet-toothed thieves could be operating in the region after chocolate bars at a value of thousands of kronor were taken from his shop in three separate raids.