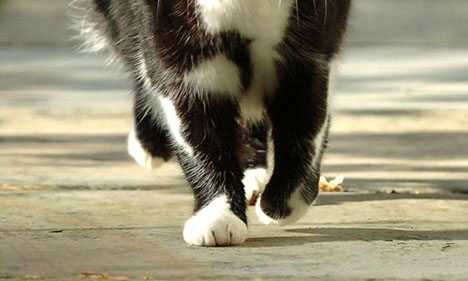 Swedish people have a reputation for being independent and self-sufficient and now it seems these traits may have been picked up by at least one of their pets.

A lost cat has been found by its owner ten years after its disappearance in the small Swedish city of Falun.

The animal, called Sessan, was discovered at a recycling station by Johanna Holmbom who is 24.

“It is amazing that we found her,” she told The Local, after her story went viral in Sweden.

Holmbom's family bought the cat back in in 2004 when she was a teenager. However it soon got lost and the family believed it had been eaten by a fox or another wild animal after multiple searches failed to lead them to the beloved pet.

But last week, Holmbom spotted Sessan's face while she was at a local recycling station.

“I went there to throw away a lamp when I saw a cat lying on an old pillow and it seemed really familiar,” Holmbom said in a separate interview with regional newspaper DT.

She explained how she had texted a photo to her parents to ask them if they could spot the likeness too and they confirmed that the cat looked like Sessan. Holmbom then took the animal to a vet who confirmed that she had indeed identified her former pet, after checking its earmark with a national database.

An employee at the recycling station said that the cat had been seen hanging out in the area for years, however the vet suggested that there were also signs that the animal had been looked after by a mystery carer.

“She is a little bit overweight, her fur looks good and her teeth look fine. So the vet believes someone has taken care of her,” Holmbom told DT.

The happy owner told The Local she was surprised by the attention she and Sessan had got in the media, and was not interested in giving any more detailed interviews.

However, she told DT that despite the exciting reunification, she was not planning on keeping the animal for long because she and her partner were in the process of moving.

“I hope we can find a good home for her as soon as possible since we also are in the middle of moving and can't take care of her,” she explained.