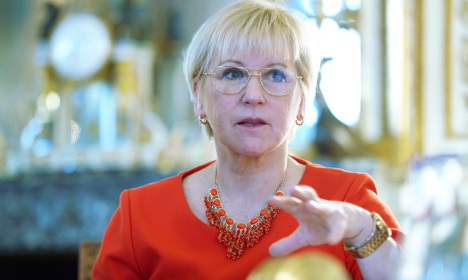 The Times of Israel reported on Wednesday afternoon that Foreign Minister Tzipi Hotovely had declared that Stockholm officials were no longer welcome in the country following controversial statements by her Swedish counterpart.

“Israel is closing its gates to official visits from Sweden,” the newspaper quoted Hotovely as saying.

But a spokesperson later confirmed to Swedish newswire TT that the ban only extended to Wallström herself.

“It's just Margot Wallström,” said Emmanuel Nahson from the Israeli foreign ministry. He later added that Sweden would not be allowed to play a role in the Israel-Palestine peace process as a result.

Wallström stirred debate after she responded to a question in parliament by an opposition member on the controversy raised in December by her statement on the need for Israel to avoid “extrajudicial executions”.

She was referring then to the more than 100 Palestinians killed in two months, most while committing or attempting to commit knife attacks in Israel and the Palestinian territories, and others in clashes or attacks.

Since then the Palestinian toll has reached 149, including an Israeli Arab.

“It is essential that thorough and credible investigations be conducted concerning these deaths with the aim of providing clarity and bringing about possible accountability,” Wallström said on Tuesday.

“In her irresponsible and delusional statements the foreign minister of Sweden gives support to terror and in so doing encourages violence,” it said in a Hebrew-language statement.

Later, Hotovely spoke during a meeting with future Israeli diplomats, suggesting that Sweden was responsible for encouraging terrorism.

“For over two years, relations with Sweden have been at some level of disconnect. (…) At the clearest level, the State of Israel is sending a very stark message to Sweden that says that (when) you encourage terror (in Israel), you encourage Islamic State to act in all parts of Europe: in Brussels, in Paris,” Hotovely was quoted by The Times of Israel as saying.

“We're currently at the front line of the battle against terror. (Wallström) is de facto supporting it, encouraging it, and the State of Israel is sending a blunt message.”

But Wallström defended her comments in an email to TT late on Tuesday.

“We want a good relationship with Israel and pursue active dialogue that also includes values. (…) The EU's High Representative for Foreign Affairs stressed as early as in October the importance of carefully investigating the circumstances of Palestinian deaths as a result of intervention by Israeli security forces,” she wrote.

Ties between Israel and Sweden plummeted after Stockholm recognised the Palestinian state shortly after Wallström's centre-left Social Democrats won a parliamentary election in 2014.

A day after the Paris attacks claimed by the Islamic State group, Wallström again attracted Israeli condemnation when she said the decades-old Israeli-Palestinian conflict was a factor in radicalisation.

The Israeli foreign ministry said then that Wallstrom “has consistently demonstrated bias against Israel”.