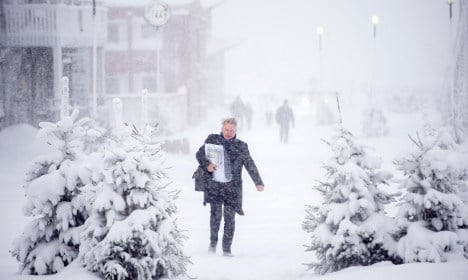 While some parts of Europe have yet to experience their first dusting of flakes this winter, Swedes have been out in force taking pictures of this and last week's heavy snowfall.

One candid camera-style video shot by a pupil at a school in Gävle, in northern Sweden, brought on some laughs when it showed Swedes one after the other slipping on the icy ground.

“As soon as people walked past, someone slipped. Our entire class was standing there laughing. Our teacher had to tell us off, but what can you do?” the pupil, named only as Amanda, told Swedish viral news site Lajkat.

Meanwhile, some of The Local's readers sent in pictures of the blanket of snow covering the nation. A picture of the snow in Karlstad sent in by a The Local reader. Photo: Carlos A. Perdomo

If you want to book in a snowball fight or ice-skating competition in the coming days you're in luck. The subfreezing temperatures are set to stick around for the coming week and weekend.

However, remember to wear thick socks and your best woollen sweater – particularly in Stockholm, where the mercury is expected to drop from -6C to a chilling -20C on Friday.

READ ALSO: How to deal with winter like a true Viking

Think that sounds cold? According to meterologists you will see nothing compared to the record this winter when Naimakka in the far north froze to -42.8C earlier in January.

“By and large the mountainous areas in central parts of the country will get the lowest temperatures, but it could be just as cold further north. The lowest (temperatures) will be around -20C to -30C in the coming days,” Sofia Söderberg, meteorologist at Swedish weather institute SMHI told the TT newswire.