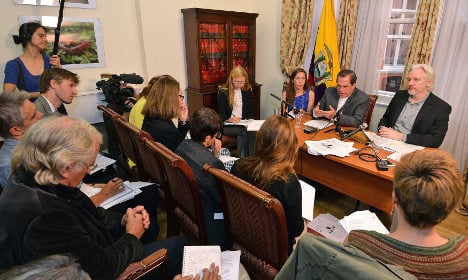 “We will cooperate with the Swedish authorities so they can take some statements. We have said that from the beginning,” said Ecuadoran Foreign Minister Ricardo Patino in an interview with news site Ecuadorinmediato.

He said the interrogation would take place under Ecuadoran law because the 44-year-old Australian, who faces a rape allegation, “is under our country's jurisdiction”.

The minister added that he did not know “exactly what the procedure is”, but that Ecuadoran prosecutors would carry out the questioning – though Swedish prosecutors could also be present, he added.

Assange has been holed up in the Ecuadoran embassy since 2012. He has repeatedly refused to travel to Sweden to answer to the rape allegation, saying he fears he would then face extradition to the United States and trial over the leaking of hundreds of thousands of classified US military and diplomatic documents in 2010.

Patino questioned why it had taken Swedish authorities “so long” to agree to question Assange under Ecuadoran law, and said it fuelled “suspicions”.

“We believe there really is a process of persecution” against Assange, he said.

Last March, Swedish prosecutors offered to question Assange in London, dropping their demand that he come to Sweden.

But Ecuador refused to allow an interrogation until the two countries signed an agreement on general legal cooperation – which they finally did in December.

But they still want to question him about a 2010 rape allegation, which carries a 10-year statute of limitations.

Assange has denied all the allegations and insisted the sexual encounters were consensual.