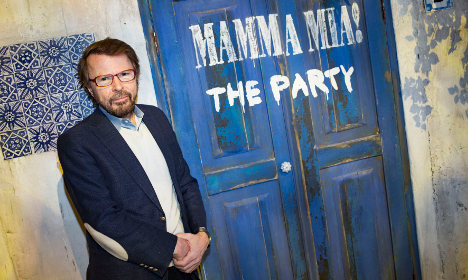 It's -15C in Stockholm and the ground is covered in snow. But inside Nikos' Taverna, there's laughter, warmth, Greek food, singing and dancing. At least, that's what Björn Ulvaeus wants visitors to feel when they step into the world's next Abba-themed venue.

It is part restaurant, part show and part role play, where guests can become the stars of their own version of their Greek paradise. As soon as visitors walk through the doors of they are greeted by waiting staff and actors playing characters in the interactive show.

“It feels good. We're in good shape. We did a couple of previews last year, but next week is the first time since then we're going to do this in front of a real audience,” Ulvaeus tells The Local while showing off his new attraction to Swedish and international media, ahead of its official public opening later this month.

You may ask how much it is possible to squeeze out of a Swedish pop quartet that won Eurovision back in 1974. But with the world falling in love with everything from acclaimed Mamma Mia! The Musical to big screen equivalent Mamma Mia! The Movie in 2008 and even Stockholm's Abba Museum, the well-oiled machine shows no sign of stopping. On Wednesday the curtains go up in the Swedish capital on Mamma Mia! The Party.

One of the new faces in the recreated taverna, only loosely based on its inspiration Mamma Mia! The Musical, is Konstantina – who helps her father Nikos out at the restaurant and is, we soon find out, apparently in love with a boy whom dad doesn't quite approve of – played by Swedish-Hungarian rising musical star Mercedesz Csampai.

“It is such great fun to finally be able to show people this. The music is wonderful, you can feel how much the audience loves it – I mean, it's Abba! I don't know what I enjoy the most about it, but my favourite song to perform is 'The Winner Takes It All',” she laughs. Decorated with olive trees, Mamma Mia memorabilia and a bar (which of course serves ouzo), the room is filled with tables all covered in blue-and-white table cloths. Let's just say that if you don't like the idea of vacationing in Greece – now's the time to back out.

“You will have an amazing three-course dinner, and get to take part in the whole show which starts when Nikos welcomes you at the door – or even at home when you get your ticket confirmation emailed to you,” director Roine Söderlundh tells The Local.

That ticket he mentions costs 1,340 kronor ($157), something which has had some international fans complain that the night – on top of flights and hotel room in Stockholm – would set them back too much. Even so, the first few weeks of the party are long since sold out.

“I understand that when you just look at the price it's a lot,” says Söderlundh. “But you also get a very generous dinner as well. It doesn't cost much more than dinner and theatre.” International fans may also have cause to worry about most of the dialogue being in Swedish – although the songs will be sung in English. But Söderlundh insists that the plot is straightforward enough to understand and reassures fans that actors will interact with non-Swedish speakers in English.

And Ulvaeus has a special treat in store, which he hinted at in an interview with The Local back when the project was first announced in April.

“We've started rehearsing for a version completely in English this summer. We're also going to do an English version during Eurovision week when all the tourists are here,” he says.

Now, it is a fact universally acknowledged that you can't mention Eurovision Song Contest – heading to Stockholm in May – without talking about Abba. And you can't talk about Abba without mentioning fans' undying desire to see their beloved Swedish pop stars reunited on stage.

It's not going to happen, as has been repeated several times, but Ulvaeus has gone so far as to reveal that his three former Abba colleagues – Benny Andersson, Agnetha Fältskog and Anni-Frid Lyngstad – have all been invited to attend the gala premiere of Mamma Mia! The Party on January 20th.

He is humble about the fact that a new generation of fans is likely to grow up knowing more about the Mamma Mia franchise than Abba themselves – but is not worried about their Swedish treasure of iconic pop hits like 'Waterloo' and 'Dancing Queen' being forgotten.

“I have heard about children who sing the Mamma Mia tunes and dance along to the movie and have a very diffuse idea of who Abba are. But maybe some of them will like it so much they go back to the original source. And we're still selling records, every year,” he smiles.