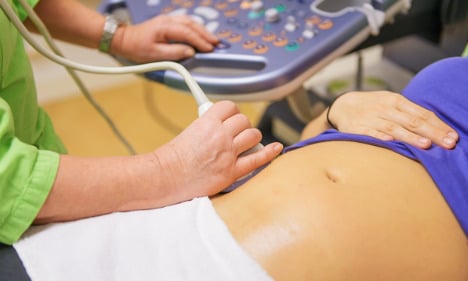 A woman having an ultrasound in Sweden. Photo: Simon Paulin/Image Bank Sweden
The move comes after a huge majority of politicians passed the law in the Swedish parliament late on Monday, with 218 members voting in favour of the policy, 40 opposing it and 13 people abstaining.
It means that women without a partner will soon be entitled to the same rights as heterosexual and gay couples in the Nordic country who are usually offered three free rounds of IVF at public hospitals.
Anna Kinberg Batra, leader of Sweden's largest centre-right opposition party, the Moderates, described the result as “one of several important steps towards a modern family policy”.
Speaking to the TT news agency she added: “It makes it possible for all children to grow up in secure families and ensure the legislation works for as many families as possible and is adapted to what society actually looks like.”
The idea was originally put forward by an inquiry funded by the former Moderate-led government in May 2014. Led by investigator Eva Wendel Roseberg, it suggested that it should be up to doctors to determine whether or not potential mothers are capable of taking care of a child by themselves, following a range of medical and psychological tests.
READ ALSO: Movie sheds light on single life in 'independent' Sweden
Private IVF treatment in Sweden costs around 30,000 kronor ($4,150) per cycle. In recent years, increasing numbers of Swedish women have travelled abroad for fertility treatment instead, especially to neighbouring Denmark.
“They leave because they don't enjoy the same opportunities in Sweden, because Swedish rules for such a treatment still assume that two parents are required to raise a child. It is an outdated view,” Justice Minister Morgan Johansson, Equality Minister Åsa Regnér and Public Health Minister Gabriel Wikström wrote in an opinion piece for Swedish broadcaster SVT's online debate section last year. A Swedish child enjoying a snowy car ride. Photo: Melker Dahlstrand/Image Bank Sweden
“Today we are eating cake!” Sweden's independent sexual health and advocacy body RFSU posted online on Monday, just after the decision was announced.
“It's a real victory – we have been waiting for this for years and years and we are so happy for the result,” its head Kristina Ljungros told The Local.
“The most important thing is that whether you can have IVF will no longer be a question of your financial situation. But also we are now recognising better all those families that are already one parent familes in Sweden – this is sending a sign to them,” she added.
It is estimated that between 1,500 and 2,000 single women could take up the chance to get fertility treatment in Sweden every year once the law comes into force. According to the RFSU there are “at least 500” Swedish women who have already sought IVF privately, although there are no official statistics available.

DEBATE: Do you agree with Sweden's decision to allow single women to have free IVF treatment?

The legislation was opposed by the nationalist Sweden Democrat party and the right-wing Christian Democrats, which both argue that children should ideally have both a mother and a father and oppose the idea of the state assisting the growth of one-parent families.
But supporters of the new policy argue that their approach is an old fashioned one.
“Becoming a parent is not something you are deciding in a coffee break. It is something women think about for years, and if they don't have a partner and are getting older and older they might think it's better to get a baby now and find a partner later. They might also want to be single and are not looking for a partner,” said Ljungros.
She suggested that while most mothers or fathers currently who become single parents do so unexpectedly, either because of a death or because a partner leaves them, single women signing up to have a baby alone can benefit from being able to plan ahead and organise help from friends and family.
“It's also still the case that there can be two parents but only one parent is really 'present' in a child's life. So there are already lots of positive examples of people already being single parents in a way.”
Single mothers in Sweden will be entitled to the same 480 days of paid parental leave that is offered to all couples in the Nordic country, where partners are encouraged to split the time off between them.
In addition, they will have access to state-funded day care available for children aged between one to five, capped at 1,260 kronor a month (around $150) for their first child and lower costs for each subsequent addition to their new family.