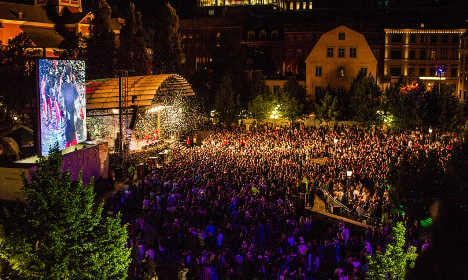 The We Are Sthlm festival last summer. Photo: Alexander Tillheden/We Are Sthlm

Announcing the decision in a statement, Mats Åhlund, a laywer at the special prosecutor's office, said there was “no reason to believe representatives of the Police Authority committed crimes subject to public prosecution”.

Earlier this week, police were criticized after they admitted they failed to release information about the alleged sexual assaults against women by young immigrants.

After the alleged attacks were revealed in a media report, police said there were 38 reports of rape and sexual assault filed after the We Are Sthlm festival in 2014 and 2015 – a Stockholm-based festival which uses the postal abbreviation for the city.

The allegations, however, were not publicly released at the time.

The Swedish daily Dagens Nyheter (DN), which reported the failure to disclose the allegations, reported that among the majority of people suspected of being involved were 50 Afghan refugees who had come to Sweden without their parents.

After the DN report, citing internal police memos and suggesting a possible cover-up, police responded by releasing some details of the alleged assaults and conceded an error of judgement.

“We certainly should have publicly released this information, no doubt. Why it did not happen we simply do not know,” police spokesman Varg Gyllander told the AFP news agency on Monday.

READ ALSO: 'A swine is a swine, no matter their ethnicity'

It is usually rare for information about alleged criminals' identities or ethnic backgrounds to be revealed during police investigations in Sweden or reported by the Swedish media.

However, the controversy over the Swedish festival comes amid a global debate about when connections to race should be made publicly by police, following 121 sexual assaults in the German city of Cologne on New Year's Eve.