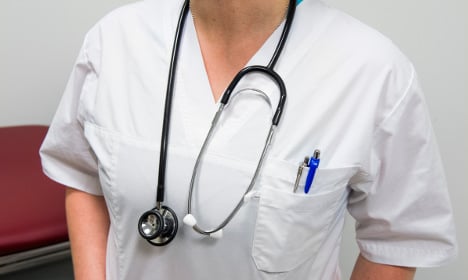 A stock picture of a nurse not related to the article. Photo: Claudio Bresciani/TT

Care staff at Astrid Lindgren's Children's Hospital in Stockholm – named after Sweden's famous children's author – sparked heated debate after they stripped off and got into sexy poses for a 2016 wall calendar.

One of the images shows a male health worker straddling a colleague in one of the hospital beds. Another image shows a man with his legs apart wrapped in hospital tubes.

“It is clearly inappropriate and a sign of very poor judgement,” hospital chief Svante Norgren said after he was made aware of the calendar by the Dagens Nyheter (DN) newspaper, which broke the story.

100 copies of the saucy calender were printed and sold to the models' families and colleagues at the children's emergency department. But after the images were shared around the web, many took to social media to hit out at the hospital workers.

Some of the employees on the Astrid Lindgrens Barnsjukhus (Childrens hospital) took sexuall pictures in the hospital! WTF is going on?!?!

The (near-)naked calendar trend won't die, but sexualised pictures in a children's hospital may push the limits… https://t.co/1M8nM3pOF0

“This behaviour is reckless and hospital management takes the situtation very seriously. It is always of utmost importance that all our patients and families are able to have full confidence in the car we provide and for all healthcare employees,” read an official statement published on the hospital's website.

Norgren told DN that he would be speaking to the workers involved, who have been told not to produce a similar calendar in the future. “It won't happen again,” he vowed.

But the calendar divided opinion in Sweden on Friday, with some arguing that it had been done for a good cause with the money raised donated to children's health charities. Others pointed out that a range of people from different professions had stripped off for similar calendars without anyone raising an eyebrow.

“'Care staff took sexual pictures in the children's hospital beds'. Says more about the beholder if you interpret them like that,” wrote one commenter on Twitter.

Astrid Lindgren's Children's Hospital is part of Karolinska University Hospital. It was founded in 1998.