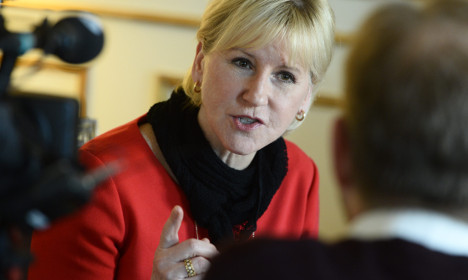 The unusually frank approach of Sweden's foreign minister is deeply divisive. It has seen fans send her flowers over her biting criticism of Saudi Arabia — yet also prompted Israel to declare her persona non grata.

Declared unwelcome by authorities in the Jewish state on Wednesday thanks to a raft of critical comments, Margot Wallström has made a name for herself as a vocal feminist and fierce defender of human rights.

The 61-year-old Social Democrat is the undisputed star of her government, but critics wonder whether her tendency to speak her mind — not a quality traditionally found in diplomats — is good for the country.

She has repeatedly enraged Israel, starting with Sweden's recognition of a Palestinian state shortly after she became foreign minister in October 2014.

In the wake of November's terror attacks in Paris, she identified the Israeli-Palestinian conflict as one of the factors explaining why “there are so many people who have become radicalised” — comments Israel called “appallingly impudent”.

And in December, she called on Israel to halt what she called “extrajudicial executions” in response to attacks by knife-wielding Palestinians, following up with a demand the next month for “thorough” investigations into the killing of Palestinians by the Israeli army.

Firmly signalling that Wallström needn't book any trips to Israel in the near future, the country's deputy foreign minister Tzipi Hotovely blasted her comments as “a mix of blindness and political stupidity”.

Swedish critics have also questioned the wisdom of her diplomatic strategy.

“The political actions of Margot Wallström are marked by controversy,” said liberal commentator Lars Kriss, arguing that her anti-Israel offensive borders on “an obsession” and questioning whether she is “an asset” to Sweden.

“Margot Wallström has already made trouble with her habit of thinking aloud,” wrote financial newspaper Dagens Industri. “She is beginning to become a problem.”

Wallström defends her approach, pointing to the huge number of people who sent her flowers after she lashed Saudi Arabia for human rights abuses in frank terms that other Western foreign ministers might have avoided in dealing with the oil-rich state.

“It's important that you stand up for what you believe in, even when it costs you,” she told The Local last year.

“I think there's a double standard among many who criticised me. They say that 'yes, sure, we'll stand up for democracy and human rights, but it must not cost us anything.' And yes, one could actually wish for a clearer stance from those who at least in words say they want to support my position.”

In March 2015, Riyadh recalled its ambassador to Stockholm, accusing Sweden of “flagrant interference” in its affairs after Wallstrom told parliament the country was a “dictatorship” that violated women's rights and whipped bloggers.

And around the same time, Sweden unilaterally cancelled a long-standing military cooperation deal between the two countries.

Saudi Arabia proceeded to freeze Swedish business visas to the Gulf kingdom — but with Stockholm fearing the financial impact, Saudi business leaders were invited for talks, and the two countries have now normalised ties.

Wallström has also found time to condemn the “reign of terror” of Russian President Vladimir Putin. Handed the foreign policy portfolio by Prime Minister Stefan Löfven — a former metal worker well aware of his own inexperience on the international stage — Wallström has come a long way for someone who started out as a lowly bank clerk in the provinces.

Born in northern Sweden, she became an activist in the 1970s in the solidly left-leaning western province of Värmland, entering parliament at the age of 25.

She has spoken out tirelessly against the under-representation of women in politics, with UN Secretary-General Ban Ki-moon naming her special envoy on Sexual Violence in Conflict in 2010.

And with her country struggling to cope with a huge migrant influx, she cried on television last September when commenting on the fate of Aylan Kurdi, the Syrian toddler whose photo became a heartbreaking symbol of the refugee crisis when his body washed up on a Turkish beach.