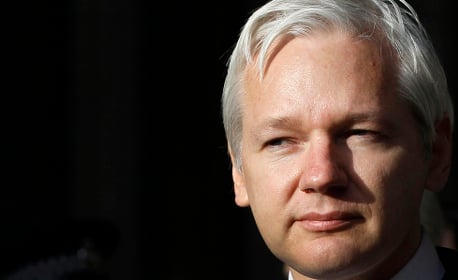 Ecuador granted Assange asylum in 2012, after he sought refuge at its embassy while facing extradition to Sweden. Photo: Kirsty Wigglesworth/AP/file

“If they don't charge him, he can leave. We hope we won't have any problem with the United Kingdom. He would likely come to Ecuador, because he has already been granted asylum in our country,” said Foreign Minister Ricardo Patino in an interview on public radio.

Assange, who faces a rape allegation in Sweden, has been in hiding at the Ecuadoran embassy in London since 2012.

The 44-year-old Australian refuses to travel to Sweden to answer the allegation, saying he fears he would then face extradition to the United States and trial over the leaking of hundreds of thousands of classified US military and diplomatic documents in 2010.

Ecuador granted Assange asylum in 2012, after he sought refuge at its embassy while facing extradition to Sweden.

British authorities have vowed to arrest him if he sets foot outside the embassy.

Sweden said Wednesday it had formally requested permission to interrogate Assange at the embassy, after months of diplomatic wrangling finally yielded a Swedish-Ecuadoran deal on legal cooperation last month.

Patino has said Ecuador will cooperate with Swedish prosecutors, but that the questioning will be conducted by Ecuadoran officials under Ecuadoran law.

But they still want to question him about a 2010 rape allegation, which carries a 10-year statute of limitations.

Assange has denied all the allegations and insisted the sexual encounters were consensual.