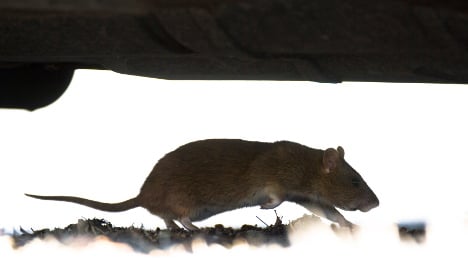 (Probably) not the rat mentioned in the article. Photo: Fredrik Sandberg/TT

It was midnight and Susanne Eliasson, 55, was brushing her teeth when suddenly she heard a peculiar noise.

Bracing herself, she lifted the lid and found a gigantic rat splashing around in the porcelain bowl, trying to wriggle its way into her apartment.

“It was very loud so I was prepared for it but thought 'don't tell me there's something there…',” she told the Aftonbladet tabloid on Monday after the initial shock had worn off.

The nonplussed Eliasson described how she tried to flush the rodent without success.

“It just got wet and kept trying to crawl up. It was late on Saturday night and I had it in the toilet and didn't know what to to,” she said.

But, worried that her cat would get wind of the uninvited house guest, she chose a more hands-on solution: lifted the lid again, got hold of the rat and carried it out of the apartment.

“It was perhaps not very clever, but I was in panic and didn't know what to do,” she told regional newspaper Göteborgs-Posten, adding that she called a pest control firm the following morning.

Henrik Mortensen, communication strategist at Gothenburg housing company Familjebostäder, told the paper that the number of rats are increasing in the city.

“Unfortunately it happens every now and again that rats enter through the pipes, but that they come up through the toilet is luckily still very rare,” he said.

“At the moment the rats are more active under buildings because it's so cold outside.”

However, while big enough to give Eliasson a fright, the rat was nowhere near the size of the 40 centimetre beast one Swedish family caught in their kitchen almost two years ago. Check it out here.