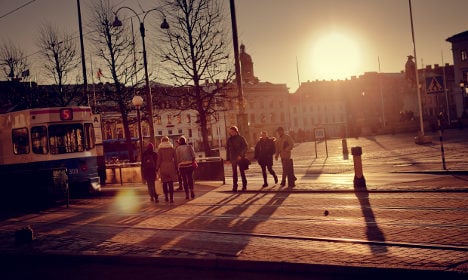 One of Gothenburg's iconic trams. Photo: Werner Nystrand/Image Bank Sweden
Gothenburg's famous blue and white trams have a reputation for being rattly and rusty, but on Monday tram drivers speaking to Swedish newspaper Gothenburg Post (GP) revealed a far greater problem.
They told the paper that a frequent technical fault means that some of the vehicles' emergency doors regularly get stuck or fail to open at all.
“This makes me so mad,” said one source who wanted to remain anonymous.
“It's extremely serious, if there's a fire in the carriage and people can't get out quickly,” they added.
“It's a pure death trap,” another driver told GP.
Internal documents seen by GT confirm at least 72 reported cases of problems with emergency doors between 2007 and 2014.
According to the paper, the Italian supplier of the trams, AnsaldoBreda, has been contacted on several occasions and asked to look into the issue, but has not been able to offer a solution. Instead, the city has contracted other engineers to troubleshoot the problem, without success.
Henrik Hubert, chairman of the board for Göteborgs Spårvägar (Gothenburg Trams), the Swedish transport company that operates the trams, admitted to The Local on Monday afternoon that the door errors are “sometimes happening (…) about once a month”.
“We are working on these difficult technical problems and discussions are going on between our lawyers and the Italian company about how to resolve this,” he said. A tram in Gothenburg. Photo: Emilie Asplund/Image Bank Sweden
Sweden's Transport Agency (Transportstyrelsen) said earlier that it was up to regional transport providers to carry out their own safety and security checks and “to handle problems like this themselves”.
“We received a report from Göteborgs Spårvägar in January 2014 that they had problems with the emergency openers and that they were going to investigate it. Since then, we haven’t heard anything from them on this matter,” Henrik Olars, a press spokesperson for the agency, told The Local.
He added that the transport agency did carry out “regular checks that they [transport firms] follow their own security routines” but said he was unable to share any information about the last audit on the tram network.
The Local has sought further comment from Ansaldo Breda, which was absorbed by global transport firm Hitachi last year.