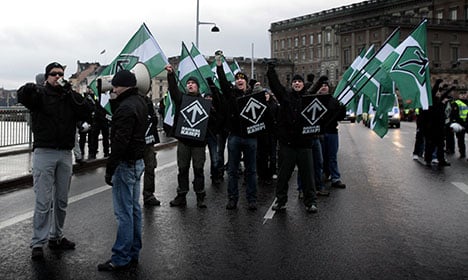 The Swedish Nazi movement Svenska Motståndsrörelsen pictured at a demonstration in Stockholm in 2009. Photo: Fredrik Persson/TT

Staff and students at Alsalamskolan, a free school attended by Muslim pupils, and at Tullängsgymnasiet, a high school in Örebro, were met by tape covered with a Nazi symbol when they turned up after the weekend break.

Hussein al Doubdi, the head teacher at Alsalamskolan, told Swedish media that teachers were initially confused about the logos, before looking up the symbols online and discovering that they were linked to the Swedish Nazi movement Svenska motståndsrörelsen's (SMR) Nordfront wing.

“When we searched on the Internet about what the logo on the tape was, we understood were it came from,” Doubdi told SVT.

“Nordfront is like the Swedish Isis. It is an organisation that wants to get their opinions across through violence and threats,” he said.

However police said it was initially unclear whether or not they would seek to press charges, or if the incident could be classified as a hate crime.

“We have written a report, but without classification. Now we will leave the matter to our prosecutors who will look at if this will be considered a crime,” a duty officer for Örebro police, Johan Wallenius, told the region's local newspaper NA.se.

According to the police, it is hard to know if the tape will be considered a racial agitation or not.

“How the students of the school and the staff have perceived what happened is pretty crucial for the classification,” said Stefan Wickberg, a press officer for the force, in a separate interview.

Svenska motståndsrörelsen (SMR) is a far-right group which has previously said it wants to “take command” over the Nordic countries. It made international headlines in 2013 after using violence to try to stop an anti-racist demonstration in Kärrtorp, Stockholm, in 2013. The organisation has also claimed the Holocaust did not take place.