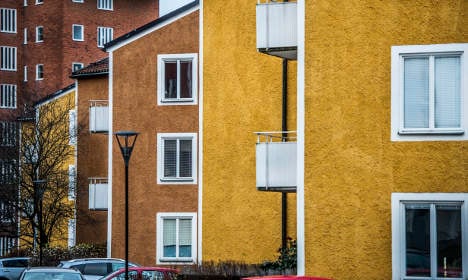 Housing in Stockholm. Photo: Lars Pehrson/SvD/TT
While it used to be the case that you could often put in a cheeky below-asking-price offer for a home in Sweden, it seems the practice is becoming increasingly rare, amid record average price increases across the country.
Figures released this week by Booli, one of Sweden's online largest property marketplaces, reveal that the number of sales below original asking price has dropped by 50 percent in Sweden since 2012. Three years ago around 17.3 percent of properties went for less than sellers hoped, compared to just 8.7 percent in 2015.
“It was an exceptional year for housing where prices increased dramatically in many parts of the country during the year. The share of reduced-price apartments [falling] and shorter advertising times are a natural consequence of this,” said Josephine Linghammar, marketing manager for Booli.se, in a press release.
Booli, which is part owned by the Swedish state, revealed that the mean length of time a property was advertised for in Stockholm was just 17 days – a record low – and dropped to 16 days in Gothenburg. The national average was 25 days.
Some experts believe Sweden's housing market will cool this year, following a number of strong warnings that the market has become a bubble that is waiting to burst.
But while there have been signs of small dips in sales prices in recent weeks, other commentators argue that it is typical for prices to drop over the festive season and could still pick up swiftly in the coming months.
Per-Arne Sandegren, head of analysis for Mäklarstatistik, a Swedish agency which measures real estate agent sales told The Local last month: “The best thermometer will be in late January and early Febuary when it usually picks up (…) It is still very cheap to borrow money and there is a shortage of housing and a big demand still”.
READ ALSO: Housing troubles stop business from relocating to Sweden
Concerns over property prices in Sweden come as the country also deals with a complex rental scene that has left people queuing for years for rent-controlled apartments while prices spiral on the black market.
The Swedish foreign minister Margot Wallström has faced strong criticism in recent days after it emerged that she recently accepted an apartment from Sweden's biggest trade union in the midst of the national housing shortage.