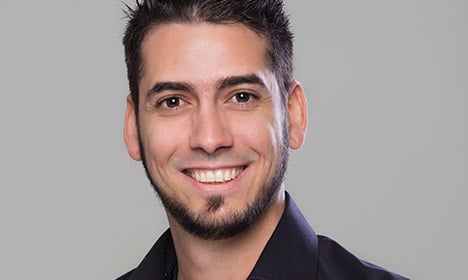 Edel Puntonet found his passion for photography through a friend. Photo: EdelPhoto

Born in Cuba in 1983, Edel Puntonet, 32, had not yet discovered his passion for photography when he moved to Sweden in 2007. Nor did he speak a word of Swedish when he arrived. So it is hard not to be impressed by his glowing career in Scandinavia.

Starting off as an egg packer in Umeå, in the north of Sweden, Puntonet now has a successful career as a photographer and runs a business in the city.

His journey started after a friend introduced him to photography and he quickly found his niche.

“I got a camera in my hands and then I said that I was going to be a photographer, I’m going to start a business and I am going to succeed,” Puntonet told The Local.

It took the Cuban just six months to get his first photo gig and three years later he had founded EdelPhotos, a company providing commercial photography, product photography and wedding photos.

Feeling as though he had achieved all of his core goals with the business, he then joined forces with Jo Kommunikation, a communications agency which provides services including writing press releases and creating online profiles and logos for companies.

The successful photographer and businessman won several awards including Umeå's ‘Youth Entrepreneur of the Year’ prize and the ‘New Business of the Year’ award for the region of Västerbotten in 2015. An example of what kind of photo service EdelPhoto provides. Photo: EdelPhoto.

Puntonet says that there are two major things to think about if you want to start a business in Sweden.

“I understood that two things are important. One, learn the language. The second thing is to create a network,” he explains.

“No matter if you are going to start a business or start a life in Sweden you have to get Swedish friends,” he adds.

To make any business successful Puntonet argues that you also have to make sure that both employees and customers are pleased and happy. He says that it is important to treat every consumer the same way, no matter if they are paying 20 kronor ($2,38) or 20,000 kronor ($2,377) for a company's services.

“Every single customer has to feel like they are the most important customer you’ve ever had,” he insists.

Puntonet has managed to create a client base across the Nordics, picking up photography jobs in Norway, Denmark and Finland as well as Sweden and says he has learned to tailor his style for people living in the region.

“Especially here in Sweden, in Scandinavia, where people don’t like to be photographed, the responsibility of making people comfortable in front of the camera is in the hands of the photographer,” he says.

“When I am taking photos of someone who says ‘no, I hate this, I never look good on photos’ it starts something inside me. Then I know I have to get a good photo,” he continues. Puntonet is a big fan of Sweden, saying the people here are “amazing” and that he cherishes the way the country creates opportunities for people to follow their interests.

“The freedom and opportunity of being able to fulfil your dreams, that’s what I like most about Sweden. You can do exactly what you want to do if you work hard,” he says.

And while he says Swedes can be a little bit more “closed” than those from other cultured, he argues this is by no means a bad thing.