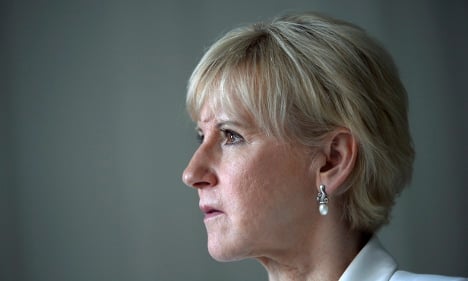 Sweden's Foreign Minister Margot Wallström. Photo: Vilhelm Stockstad/TT
Sweden's national anti-corruption unit has announced it will launch a preliminary investigation following claims that the country's foreign minister Margot Wallström was helped by a trade union to jump Stockholm's queue for rent-controlled housing, while the city battles a record housing shortage.
Special prosecutor Alf Johansson said he had “decided to open an inquiry into both the giving and taking of a bribe to determine if a crime has been committed.”
“The media has since Friday published reports that representatives for the trade union Kommunal have since late summer 2014 until April 2015 promised and then obtained a rental contract for Foreign Minister Margot Wallström in one of the union's buildings in Stockholm,” Johansson at the National Economic Crimes Bureau said in a statement.
He would not speculate on how long the investigation might take.

The scandal first broke on Friday when Swedish trade union giant Kommunal, which also owns several properties in the capital was accused of renting out its apartments to labour movement bosses while refusing to release them to the public housing queue.

The Aftonbladet daily was the first Swedish newspaper to claim that Foreign Minister Margot Wallström was one of the left's “high-profile figures” who in deference to their positions were rented apartments in the Swedish capital, bypassing a wait of on average eight years faced by ordinary renters.

The 61-year-old Social Democrat insists she acted in good faith.

“I welcome an investigation. I have nothing to hide and it is good that this will get sorted out,” she told news agency TT, adding: “I will continue to do my job.”

He suggested Wallström was guilty of no wrongdoing, but that he was sorry the issue had arisen in the first place.

Magnus Isberg, a constitutional expert, told TT on Tuesday that there was nothing in Swedish law which suggested that a serving minister should be dismissed during a preliminary investigation such as the one currently being carried out.

“A preliminary investigation is not so terribly serious, although of course it's not so good for the government. But I find it hard to believe that this would lead to prosecution,” he speculated.