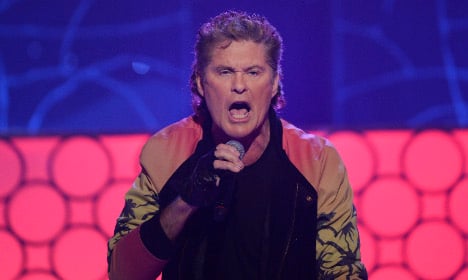 David Hasselhoff in Stockholm on Tuesday. Photo: Jessica Gow/TT
The actor and singer performed the theme song for his new short film, 'Kung Fury', at Guldbaggegalan, one of the glitziest events of the year in the Swedish calendar, which sees movie stars recognised for their work.
Dressed in a gold and black bomber jacket and tight light blue jeans, he stood alongside a burning barrel to belt out 'True Survivor', flanked by masked backing dancers. Close-ups of his face shown by Swedish broadcaster SVT suggested that he was lip synching much of the song.
When host Petra Mede – who is soon set to co-host Eurovision – thanked him for his performance, she appeared to be intentionally using an ironic tone.
“Thank you Mr. Hasselhoff. It has been an experience to have you here,” she said in English, followed by a cough, with her approach drawing laughs from the audience.
The US star then turned to Twitter once the show was over, posting: “Thank you to the host who put me down with Her comment it was an experience to have you here..Asshole!#guldbaggen”.
The tweet was later removed from his feed, but not before it had been widely shared in the Nordics.
In another message Hasselhoff took a different approach: “Great night at the #guldbaggen here in Stockholm”, alongside a snap of himself with his daughter Taylor-Ann Hasselhoff, 25, who accompanied him to the awards bash.

Great night at the #guldbaggen here in Stockholm! @tayhoff looking beautiful! I want to get one of those bugs! pic.twitter.com/TS8x8f9P46

Taylor-Ann seemed to be rather taken by the Nordic country, using her Twitter and Instagram accounts to post a photo of herself alongside stunning view of the Swedish capital with the caption “I wish I was Swedish”.

I wish I was Swedish ❄️ pic.twitter.com/2mkMp4RFyK

It is not the first time that the Hollywood actor has lashed out in Sweden.
In a previous interview with tabloid newspaper Aftonbladet, he said: “Swedes are like aliens”.
Url copied to clipboard!