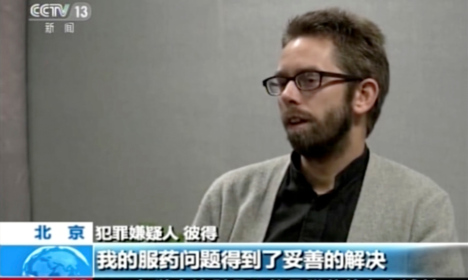 The call by Reporters Without Borders (RSF) followed the broadcast of a purported confession by Swedish human rights worker Peter Dahlin, who has been detained by authorities on accusations of threatening state security.

“We are outraged by the dissemination of forced 'confessions' that have no informational value,” said Benjamin Ismail, an Asia-based campaigner for RSF, in a statement posted on the organization's website.

RSF called on the EU to adopt sanctions against the outlets, saying doing so would be in line with EU actions in 2013 against Iranian state media officials whose broadcast of forced confessions were said to be associated with violating the right to a fair trial.

Dahlin, who worked for the Chinese Urgent Action Working Group, disappeared earlier this month as he prepared to board a flight to Thailand, and appears to have been caught up in a crackdown on human rights lawyers.

CCTV's video of Dahlin showed the Swede confessing that he had “violated Chinese law through my activities here”. Two purported Chinese colleagues of Dahlin were also shown declaring their guilt.

Xinhua said Dahlin's group was “encouraging the masses to oppose the government”.

The purported confessions were the latest in what RSF descried as “an alarming threat to freely reported news and information”.

On Monday CCTV broadcast a video of Hong Kong bookseller Gui Minhai, a Swedish citizen, confessing to a years-old drink-driving offence and saying he did not want Stockholm to interfere with his case.

Gui was rumoured to be preparing a tell-all book about the love life of President Xi Jinping. He disappeared from Thailand late last year before reappearing on Chinese national television in police custody.

While forced public confessions are an old practice in Communist China, they have experienced a resurgence under President Xi Jinping, who took power in 2012.

At least three Chinese journalists have also appeared on state television to give apparent confessions about the harm their work had done to the state.