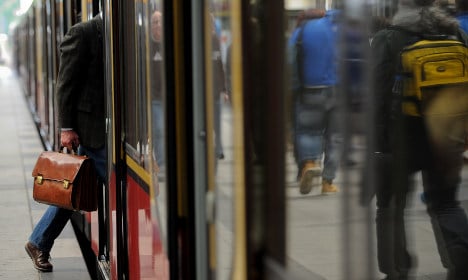 A different train station in Berlin. Photo: Britta Pedersen/DPA/AP/TT
The young woman was standing on the platform at a subway stop west of the city centre when a man pushed her in front of an incoming train on Tuesday night. She died instantly from her injuries.
But witnesses who watched the shocking drama unfold held back a 28-year-old man until police arrived at the scene, both Swedish and German media have reported.
A spokesperson for the Swedish Embassy in Berlin told The Local on Thursday that the 20-year-old victim had been living in Berlin and had both Swedish and German citizenship.
According to Swedish tabloid Aftonbladet, the suspect, who had no fixed address, had been in the German capital for just a couple of hours and had ended up at the subway stop Ernst-Reuter-Platz after being declined a place at several hostels in the city. The station is near Kurfürstendamm, one of Berlin's most famous streets, situated in the wealthy Charlottenburg area.
German Media revealed on Thursday that the man, identified as Hamin E, was known to authorities in Hamburg, having served two years and nine months in jail for serious bodily harm and robbery after stabbing another man in 2002 when he was aged only 14. He also has a history of drug abuse.
Berlin prosecutors' spokesman Martin Steltner confirmed to The Local Germany that Hamin had been transferred to a psychiatric clinic on Wednesday evening, saying that “he definitely appears to have reduced responsibility” because of mental health problems.
The Swedish Church (Svenska Kyrkan) told Aftonbladet that it would open its doors to any Swedes living in Germany who were concerned about the woman, who has not been publicly named.
“We have provided our emergency number on Facebook and we are open all day and evening,” said its rector Lena Brolin.
She said that the church wanted to make sure that Berlin's Swedish population had access to information and support.
“Especially in a crisis, it is important for many to talk about what happened in their own language.”