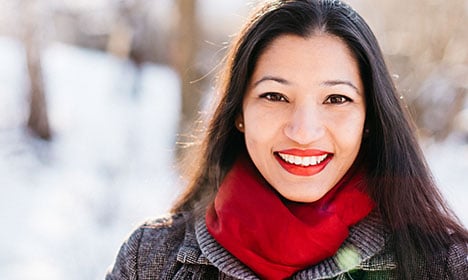 Pramodini Makehelwala Senevirathne, 33, moved from Sri Lanka to Sweden in 2011. Since then she has finished her master's degree in computer science at Stockholm University and started her own company, Bloqmode.

Like for so many others before her, it was love that first brought her to Sweden, when she married her partner who already worked in the country.

“He is also from Sri Lanka but he is working here, so after I got married I had to move here,” she laughs.

Bloqmode was born in one of her university classes, after the students were asked to work on a project and present it in front of the class. Seneviathne and her group of four suggested the idea of making quality dresses available to people on a budget, a business concept she had thought of for a long time.

“I’ve had this idea all the time in my mind,” Seneviathne tells The Local.

“After we presented this as our project idea everybody said 'wow this is really great, you should do this'.”

Once Senevirathne graduated in 2015, she and a friend thought about bringing the idea to life and formally launched Bloqmode. The concept is easy, customers either visit Bloqmode’s website or their premises in Kista, Stockholm, and rent a dress for three days or seven days.

After the launch, Senevirathne's business partner and friend left Sweden. Instead she teamed up with her husband to keep the fashion start-up going.

“My friend, she went back to her country. Now me and my husband own the company,” she explains.

So far Bloqmode only delivers dresses within Stockholm, but Senevirathne reveals she has plans in the making to grow the company even further.

“I want to expand this through the whole of Sweden,” she says.

Senevirathne's role at the company is not only to handle the paperwork, but also to deal with practical things like orders and deliveries. She argues it is important to go for what you believe in and not let insecurities or the hurdles of fate stop you.

“If you have a specific idea or whatever it is that you want to do, just go for it and just do it,” she says.

“I never thought I would be doing something like this. I mean I did my studies in IT and now I am doing my business,” she says. “I've had this idea all the time in my mind” Seneviathne says about her business idea. Photo: Caroline Holt Photography

Senevirathne enjoys living in Sweden and says the Swedish people she has met have been really nice and helpful. When it comes to the Swedish language, she says time rather than the language itself is the main obstacle.

“It’s not hard to learn actually. But the problem for me is that I don’t spend that much time learning it,” she laughs and explains that most Swedes know English well enough for her not to hurry her Swedish skills.

However, she has experienced one downside of the country, the job market.

“It is really hard to find a job. Even though I have a master's degree here.”

Even though Senevirathne thinks the job market is tough in Sweden, she still believes it is a great place for people with passions they want to develop.

Innovation is booming in Sweden, she argues and many institutions are available to help you with your business and offer financial advice.

“It is a really good place to start you business.”