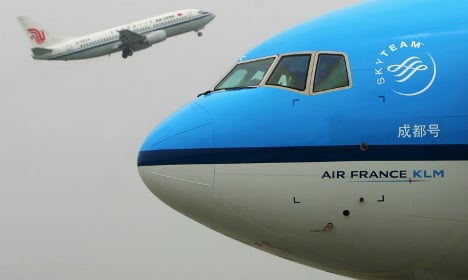 A KLM aircraft similar to the one mentioned in the story. Photo: AP Photo/Color China Photo

The 25-year-old man, who is understood to be Swedish, was believed to still be in custody in Poland on Monday after he was handed over to authorities following the mid-air incident.

“He was totally psychotic and insane. He tried to open the aircraft door,” KLM spokesperson Lisette Ebeling-Konind told the Swedish newswire TT.

Dutch journalist Annemart van Rhee told the Aftonbladet tabloid that the man had been on his way to Stockholm.

“It was terrifying. A Swedish man (…) started to hit himself and scream. Everyone was scared, including the flight attendants,” she said.

The KL876 plane en route to Amsterdam's Schiphol airport had already been diverted to Warsaw after a previous redirection during the long journey from Bangkok caused it to run low on fuel.

Meanwhile the flight crew and a number of other passengers on board the Boeing 777 were forced to physically restrain the aggressive man and tie him to a chair.

“We then handed him over to Polish authorities. You can't have a completely crazy person on board,” said Ebeling-Konind.

Unexpected visitor: B777 #KLM PH-BVO flying from Bangkok to Amsterdam landed at @ChopinAirport due to fuel shortage. pic.twitter.com/OIOjrEcWYe

To make matters worse, the flight was cancelled following the landing after crews discovered damages to the door. The 400 passengers had to spend the night in Warsaw.

A Foreign Ministry spokesperson told The Local on Monday that they were investigating reports the man was a Swedish national but had not yet managed to confirm the information.