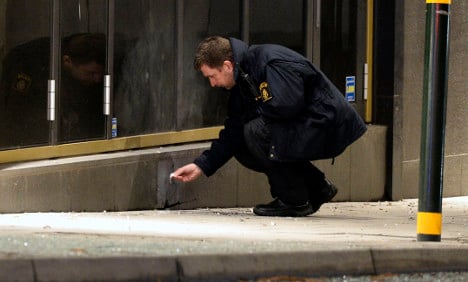 A police officer at the scene on Tuesday. Photo: Markus Ericsson/TT

Police said they were initially unsure what had caused the explosion, which took place just before 6.30pm but later described the cause as a “powerful pyrotechnic object” in an online statement.

Sven-Erik Olsson, a spokesperson from Stockholm police, told the TT news agency: “It may. It may have been a powerful firecrackers. They [the police bomb squad] have not found anything that proves otherwise”.

Witnesses of the blast reported hearing a loud noise and a “glow” in the area.

“I saw a white light. The window panes shook strongly. Now is there broken glass in the street and police everywhere,” one observer told Swedish tabloid Aftonbladet just after the explosion.

Emergency services were called to the scene but said that nobody had been hurt. A police officer at the scene on Tuesday. Photo: Maja Suslin/TT

Bomb technicians searched the property, which was sealed off from the public with police tape.

Toni Frank, a lead investigator for the fire brigade in the Stockholm region, told the TT news agency that one car had been slightly damaged in the explosion and that “there was also damage to the facade” of the building, however this was reported to be minor.

Aftonbladet said that police and fire crews had left the site by 9pm.

The Mood shopping mall, which is in the Östermalm district in the city centre, sells luxury brands including Ralph Lauren, Scotch and Soda and Marietti. The complex also hosts a champagne bar and several restaurants.