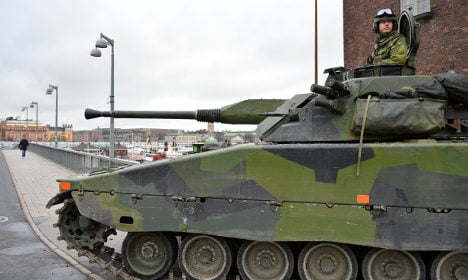 Sweden's Major General Anders Brännström made the comments in a brochure for representatives attending an annual Armed Forces conference in Boden next week.

“The global situation we are experiencing and which is also made clear by the strategic decision leads to the conclusion that we could be at war within a few years. For us in the army we have to, with all force we can muster, implement the political decisions,” he wrote, reported the Expressen tabloid.

Since the end of the Cold War the Swedish Armed Forces have focused mainly on providing assistance to international missions abroad, but according to Brännström the strategy has now changed to “capability of armed battle against a qualified opponent”.

The goal, he wrote in the leaflet, is to create “a threshold effect against military attacks and ultimately defend Sweden”.

Sweden has made moves towards stepping up its military capability in the past year, with Defence Minister Peter Hultqvist extending cooperation with other neighbouring countries as well as Nato allies in the face of rising tensions in the Baltic region.

Supreme Commander Micael Bydén has previously said that Sweden is not under any immediate military threat, but has warned that conflict may increase in the Nordic region.

“We should be aware that we are continuously being exposed to intelligence gathering and campaigns. We also know that areas in our region, the Baltic and increasingly the Arctic, constitute areas of friction between Russia and the West,” he told a military conference in Sälen earlier this month.