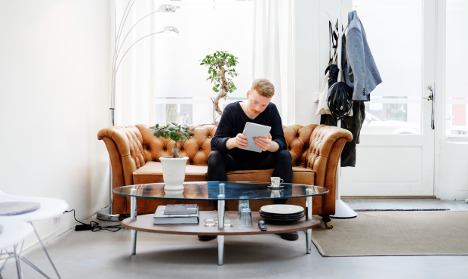 One of Stockholm's many creative offices. Photo: Simon Paulin/Image Bank Sweden
At first glance, Sweden might not look like the place to start a business. After all, the country is not even 10 million people strong, darkness reigns for six months a year and we don't have have the traditional presence of European powers such as say the UK, Germany or France. Yet, when it comes to building digital businesses these things may even come in handy.
Two often referred to examples are Skype and Spotify, which changed the communications and music industries respectively. However, these are only two out of five billion dollar tech companies founded out of Sweden since 2003 and their success unleashed an army of entrepreneurs, dreaming of replicating their global impact. The triumphant processions by the now world-renowned Swedes not only inspired others to embark on the start-up journey, but also initiated a change in the general perception of entrepreneurs. All of a sudden, starting and running your own company was pretty cool.
Being cool will help people go to quite some lengths, but that alone may not really be enough for a start-up environment and community to prosper. There are several other factors that, in my humble opinion, make Sweden an excellent place to start a company, especially a technology company.
While the size of the entire Swedish population only exceeds the population of New York City by a million or so, Sweden has proven to be an excellent market for companies to test products and services on a fairly tech-savvy audience at a smaller scale — repeat, test again, repeat again, and eventually roll out to a global audience. The positive side-effect of Sweden’s limited population, is that many Swedish start-ups have global ambitions since their inception. Jonas Vig, Swedish CEO of Stockholm-born startup Bambuser and author of this article. Photo: Private
Swedish companies traditionally have flat organisations and there’s a rooted tradition to find expertise, inspiration and innovation at all levels inside the company. I firmly believe that this is an extremely important factor when looking at how innovation and creativity is retained, nourished and keeps pushing the boundaries.
Also, Swedish entrepreneurs don’t necessarily fall from very high. In the unfortunate event that you go bust, the social security net will in most cases ensure that you don't end up on the street. This may actually not always be good though, as entrepreneurs with everything to lose may have a stronger urge to succeed. But it’s likely a great thing for aspiring entrepreneurs listing pros and cons about quitting their day job and becoming their own boss.
There's other outside help to get too. Swedish tech-successes and exits have created a plethora of wealthy angel investors and successful local venture capitalists (VCs) with fantastic experience of starting, building, scaling and internationalising companies. As they are now investing both money and their knowledge in the new breed of companies, Sweden is starting to grow a start-up ecosystem reminiscent of the ones in for example Silicon Valley and Tel Aviv. Start-up grants, low-interest loans and direct investments by government funded VCs are all helping new companies to get off the ground quicker.
While it’s been pretty amazing to follow the development over the last few years, I still believe there’s great opportunities to better cross pollinate the Swedish and for example US skill set and mentality. You’ll find some of the finest and most creative engineering, product and design skills in the world here in the cold north. Still, I believe there’s an incredible amount to learn from our American friends when it comes to selling and marketing our companies, products and services…but some Swedish companies have already proved we can do it. Yes we can!
Jonas Vig is CEO of Stockholm-based video streaming startup Bambuser and wrote this debate article exclusively for The Local