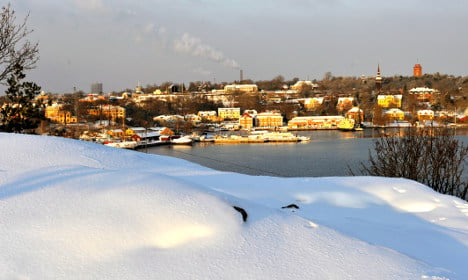 Close to where the attack was carried out in Stockholm. Photo: Hasse Holmberg/SCANPIX

The 16-year-old boy was found guilty of gang raping the woman on the island of Södermalm at the end of last summer by Stockholm District Court in November along with another teenager. They were both from north Africa and had been sleeping rough in the streets of the Swedish capital.

The teen, whose sperm and blood had been found on the woman, was sentenced to nine months in a closed detention centre for minors. If he had been an adult he would have been sentenced to four and a half years in prison, the court said at the time.

The other teenager was meanwhile sentenced to six months in a juvenile detention centre. Both guilty verdicts were upheld by an appeals court in December. A third boy was arrested but not brought to trial.

But an unnamed source within the social services told the Aftonbladet tabloid on Wednesday that the 16-year-old was again at large after disappearing without a trace from the centre in Småland county in the south-east of Sweden at the end of last year.

“He is wanted, but police don't know where to look. Apart from fingerprints they haven't established his identity,” the source told the Swedish daily.

However, both the prosecutor in the case and the woman's lawyer said they had not been informed of the disappearance of the boy – who is not due to be released until June.

“We had no idea. That's really sad to hear,” said lawyer Clea Sangborn.

Meanwhile prosecutor Christina Voigt said many children, particularly non-Swedes whose identity cannot be established, who commit crimes and are put in low-security detention facilities often fall between the cracks of the justice system.

“These homes don't have the necessary powers to keep people locked up safely,” she said.

Around 800 underage teenagers from North Africa are believed to be living in the streets of Stockholm and Gothenburg. However Swedish authorities struggle to send them back to their home countries who will often not accept them.