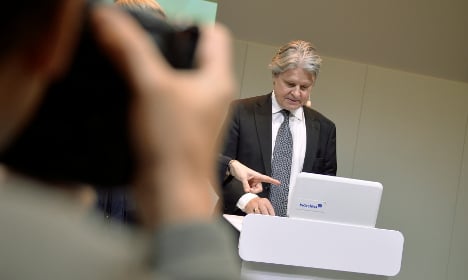 But the Nordea share shed 4.28 percent in midday trading on the Stockholm exchange, alongside Swedish telecom giant Ericsson which saw its share plummet almost five percent, as analysts had forecast stronger performance in the final quarter.

Last year “was a challenging year with exceptionally low interest rates, geopolitical tensions and market turmoil. Under these market conditions we are pleased to report an increase in the income level of three percent in local currencies”, Nordea's chief executive Casper von Koskull said in a statement.

The central banks in Sweden and Norway have slashed their key rates to record low levels, while the bank is also active in Finland and the Baltic states which use the euro and interest rates are near zero.

The group said it would devote the next three years to transitioning into “a truly digital bank”, reducing its real estate costs.

Those efforts began in the fourth quarter, when net profit slid by three percent to 848 million euros, weighed down by a restructuring charge of 263 million euros “related to staff, premises and some international units”.

Nordea explained it was financing the “shift from physical to digital distribution and establishing e-branches”. During 2016-2017, the aim is to “decrease the number of head office locations and to relocate to head office premises outside of the central business districts”. That was supposed to enable it to book savings “already in late 2016”.

Nordea remains one of Europe's best capitalized banks and able to withstand shocks with a common equity “Tier 1” ratio of 16.5 percent at the end of the year, up 0.8 percentage points from a year earlier.