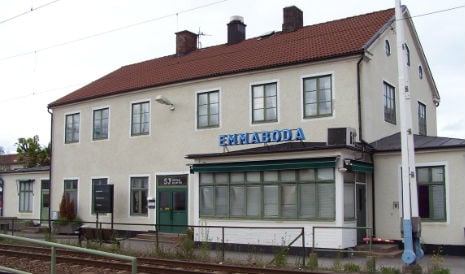 The employees were only freed when a squad of police cars arrived at the centre and arrested the alleged ringleaders behind the riot.
“There was a violent riot at the accommodation centre for unaccompanied refugee children,” Ingela Crona from the local police in Kalmar told Expressen. “They broke loose, and a total of 19 people banded together and did this.”
According to Expressen, the young men were carrying makeshift weapons.
John Nilsson, also with the local police, told the Barometern newspaper that the riot had started after staff refused a request from one of the home’s residents.
“One of them was refused to buy sweets and became furious with the staff member. He collected together around fifteen friends and the staff were forced to shut themselves in while they broke windows and did what they liked.”
Police last night seized two of the young men. One, a 16-year-old boy suspected of starting the riot, is still being held. The other has been released.
The local municipality in Emmaboda, near Kalmar, which oversees the home, has moved some of the children to another location to calm down the situation.
Problems at the hundreds of homes for unaccompanied minors which have opened across Sweden over the last year have been drawing more attention this week after one worker, 22-year-old Alexandra Mezher, was stabbed to death at a home in Mölndal, near Gothenburg, on Monday.
A 15-year-old boy was remanded in custody by a Swedish court on Thursday, on suspicion of murder and the attempted murder of another refugee teen at the home.
Earlier in the day it emerged that the centre was aware he suffered from mental illness and had appointed extra staff, who had not yet started their employment at the time of the stabbing incident.
More than 35,000 unaccompanied refugee children came to Sweden in 2015, all but 2,847 of whom are male.