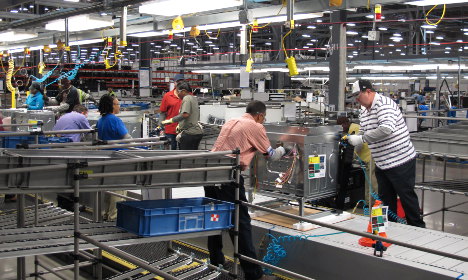 On Thursday the company announced a 30-percent drop in net profit to 1.57 billion kronor ($184.5 million dollars) while in the fourth quarter alone it saw a loss of 394 million kronor.

Electrolux abandoned a $3.3-billion deal to buy the appliance business of US rival General Electric in December after it ran into opposition from US competition authorities.

Most of the financial impact of the failed bid fell in the fourth quarter, with the company announcing a 1.66-billion-kronor charge that took it into the red.

For the full-year, “growth was particularly strong in the Nordic countries, Spain and the UK”, Electrolux said, in contrast to Russia and Brazil where demand fell most rapidly.

Electrolux announced earlier this month that its American chief executive Keith McLoughlin, who orchestrated the GE deal, would be replaced by Jonas Samuelsson of Sweden as of February 1st.

The shift in management came following a troublesome few months for the global company which is world's second-largest home appliance maker and sells brands including Frigidaire, AEG and Zanussi as well as its own name.

The company said soon afterwards that job cuts would be made at the Swedish firm's headquarters in Stockholm in order to absorb the costs of the failed deal.