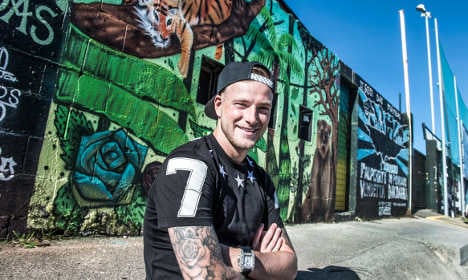 But the Swede truly captured hearts of audiences after the match, when he attempted to try out some of the Spanish phrases he had picked up after his move to the club last year.

In the interview below, the Spanish reporter for Teledeportes starts the interview by trying to establish how his Italian surname should be pronounced. But Guidetti misunderstands and thinks he is being asked how he is feeling in his post-match excitement.

When the reporter insists and asks him again for the correct pronunciation he smilingly offers another not-so-humble suggestion, referring to his nickname in media and own Twitter handle.

He continues to mix languages in the interview and comments that they enjoyed a “fiesta in the changing room” following the match, before later apologizing for his Spanish.

Although born in Sweden, Guidetti has a multicultural background. His paternal grandfather came from Italy and his great grandfather had Brazilian roots.

He also told reporters on Wednesday that he was trying to improve his language skills.

“I try my best and my girlfriend speaks Spanish so I just have to keep practising,” he said.

But Guidetti's interview style – miles from another very famous Swedish footballer you may have heard of – scored a goal with Spanish viewers, who took to social media to share the love.

“It's the interview of the year,” exclaimed Spanish Radio Marca journalist Alejandro Reza.

“The interview is even better than the goal,” wrote another.

Guidetti, who spent his formative years playing football in Kenyan capital Nairobi, was one of the key players sending Sweden through to the Euro 2016 finals in last year's qualifiers.

He has previously made a name for himself as an outspoken footballer, memorably telling the Danish team to “go home” after defeating them 4-1 in the European U21 Championships in summer.